- Facebook bans financial ads that are associated with misleading or deceptive promotional practices.

- Cryptocurrency market still reeling from Coincheck hack and the news that the CFTC has subpoena Tether and Bitfinex.

Social networking behemoth Facebook announced Tuesday that it will ban ads that promote financial products and services that are “frequently associated with misleading or deceptive promotional practices, such as binary options, initial coin offerings and cryptocurrency.” The company said that while people still want to discover and learn about new products, there are many bad actors in the space who are not acting “in good faith.”

The ban is likely to disrupt the market hard, constricting new money flows into the cryptocurrency space, while adding another layer of uncertainty, and mistrust, to the market. Without new money flows to fund the never ending supply of new Initial Coin Offerings (ICOs) the market will need to start disseminating between coins, instead of the blanket buying that has pushed the market valuation ever higher over the last 18 months. The cryptocurrency market is currently worth $512 billion after hitting a peak valuation of $830 billion on January 7 this year. 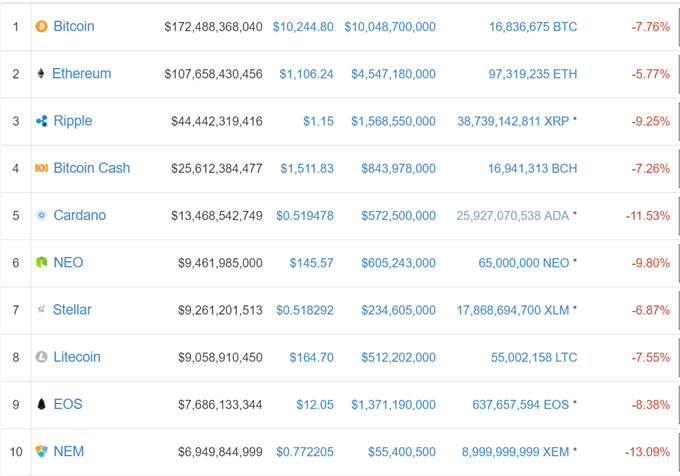 Tuesday’s news from Facebook follows on revelations that the US Commodity Futures Trading Commission (CFTC) has issued subpoenas to Tether and crypto-exchange Bitfinex. This latest revelation followed news that Tether had parted with its accountants Friedman LLP in the last week before Tether could be fully audited. And the relationship between Tether, who offer digital US dollars for fiat US dollars on a 1:1 basis, and exchange Bitfinex is also under the microscope as it seems they share some company operators.

Tether is also at the center of a speculative twitter storm with traders questioning whether the company actually has backed all of the digitally created Tethers (USDT) with fiat US dollars and if other cryptocurrencies have been used to create USDTs.

The latest news and announcement make it a bad last 7-days for crypto investors after one of Japan’s largest exchanges Coincheck was hacked last week, causing the company to accept losses in excess of $400 million. The exchange announced last Friday that 530 million NEM (XEM) tokens had been stolen and that it immediately upgrade its security measures.

Market heavyweight Bitcoin (BTC) has been trading in a sideways pattern for the past couple of weeks, paving the way for a break to the downside if support levels fail. BTC is currently nearing the bottom of a descending triangle around $9900 which if broken, and closed below, would open the door to the $9020-$9200 support zone.

If you are interested in trading Bitcoin, Bitcoin Cash, Ethereum, Ripple or Litecoin, check out our Introduction to Bitcoin Trading Guide.