- Digital heavyweights Bitcoin and Ethereum push back towards record and recent highs respectively, while Ripple (XRP) gives back some of its recent gains.

- The Republic of Estonia could be the first country with an Initial Coin Offering.

The two digital market heavyweights are continuing to forge ahead in the last three days and are close to making fresh highs. The steady uptick has seen BTC move to within $150 of its all-time high of $4472, while Ethereum is just $15 off levels last seen in late-June. Both tokens have shrugged off Tuesday’s drops and the lack of any negative news has helped push their valuations higher.

Altcoin Ripple has given back around half of its recent gains with profit-taking in Korea the likely driver. Recall that earlier in the week, XRP nearly doubled in value as turnover in Korea dramatically increased. The company recently announced that it would be bring together “leaders in banking and blockchain who are committed to changing the way the world moves money today.”Among the speakers at its upcoming “Swell; The Future is Here” event in Toronto from October 16-18, will be Dr. Ben Bernanke, Fed chairman (2006 -2014) and Sir Tim Berners-Lee, inventor of the World Wide Web.

After having already launchedan e-Residency program, a government-issued digital ID available to anyone the world, The Republic of Estonia announced this week that it could offer ‘estcoins’ via an ICO to e-Residents. According to a blog post, by Kaspar Korjus, director at e-Residency,

"An ICO within the e-Residency ecosystem would create a strong incentive alignment between e-residents and this fund, and beyond the economic aspect makes the e-residents feel like more of a community since there are more things they can do together…Additionally if these estcoins are issued on top of a blockchain (they could possibly be issued in multiple formats at the same time, nothing wrong with this) then it would become easy and convenient to use them inside of smart contracts and other applications." 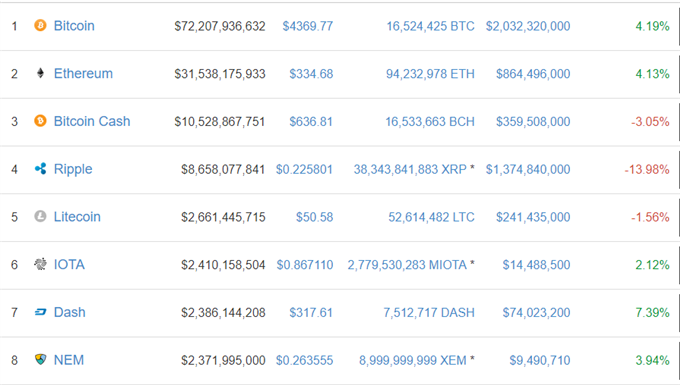 I will be discussing Bitcoin and Ethereum Trading and Strategy every Wednesday at 12:00 pm – if you would like to join me, please click here.