- Ethereum (ETH), Litecoin (LTC), Ripple (XRP) and all other digital currencies soar on the vote.

Bitcoin –Price Surges over 25% in One Session

Bitcoin miners have surpassed the 80% signalling threshold required to activate the new Segregated Witness protocol, sending bitcoin within a few USD of fresh all-time highs. Less than a week after seeing severe falls across the cryptocurrency space, the realisation that the new protocol, BIP 91, will be activated triggered buying across all digital currencies.

With SegWit2X now locked-in and ready to be activated, miners will ready themselves for faster blockchain transaction confirmation times. Blockchain currently has a maximum transaction file size of 1 MB while the new protocol will scale this up to 2 MB, making transaction times and costs faster and cheaper. The new protocol is expected to come into force in around three months’ time.

Thursday’s realisation that fears of a blockchain split, and subsequent creation of a second bitcoin, were unfounded saw the digital heavyweight’s price over 25% on a low-to-high trade basis. And on the charts, the Fibonacci resistance level around $2671 was taken out with ease as the price hit a closing high of $2840. BTC also jumped above the 20- and 50-day ema, providing another positive signal, although a look at the Stochastic indicator shows BTC trading in heavily overbought territory.

Cryptocurrency traders will also have been cheered by news out that a Federal Judge has intervened in a court case involving the US Internal Revenue Service (IRS) demands for access to currency exchange Coinbase’s customer records. US Magistrate Judge Jacqueline Corley agreed to let an anonymous Coinbase customer challenge the ruling, adding that the IRS request for records was unprecedented.

Earlier this week, American and European authorities shut down two of the largest online black markets, AlphaBay and Hansa Market, as the war against the dark web intensifies. US Attorney Jeff Sessions said that this was one of the most important criminal investigations of the year, adding that most of the activity on these sites was for illegal drugs.

A Rising Tide Lifts All Other Digital Currencies

And BTC was not alone in recording double-digit gains as all other digital currencies soared. With Bitcoin currently accounting for 47.5% of the digital currency market’s capitalisation, it is no surprise that all the other BTC alternatives – altcoins – rallied sharply. Ethereum, the second largest currency by market cap, swung from a one week low of $136 to a high of $258 before settling around $232 as the weekend looms. 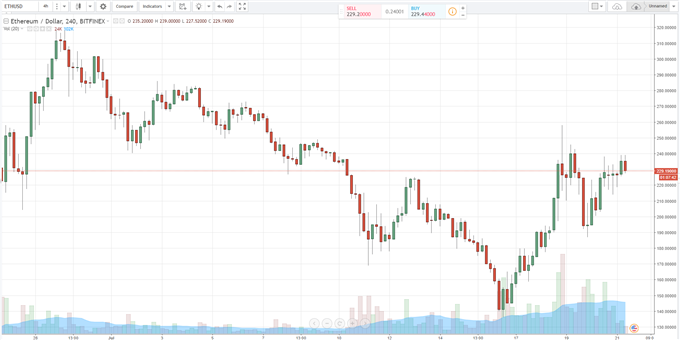