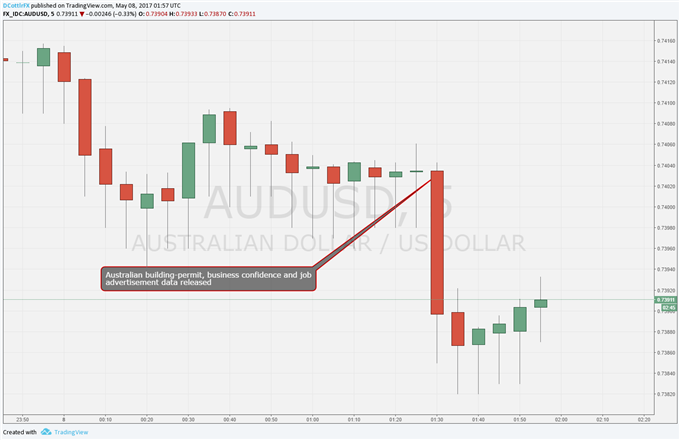 Would you like live coverage of major Australian data points? Check out the DailyFX webinars!

The Australian Dollar took a little knock Monday thanks to news of a huge drop in building-permit issuance which eclipsed more upbeat numbers released simultaneously.

Well it might. Issuance dropped by 13.4% on the month and 19.9% on the year in March, according to the Australian Bureau of Statistics. Both were massively below February’s figures which showed a monthly rise of 8.9% and an annualized fall of 4.9%.

Building permits are a sign of future construction plans. They are essential for gauging likely investment and housing demand, which don’t look great on this showing. Permits had rebounded since the start of 2017, but continue to show a broad slide from peak levels the year before.

Other March data have suggested better health for the construction sector overall, even as new-home sales fell. Australia’s housing marked is propped up by record-low interest rates. However, last month’s policy minutes from the Reserve Bank of Australia showed growing concern over housing market risks. Household credit growth is a particular worry. It continues to roar ahead of income growth. This has raised question marks at the central bank over the economy’s longer-term stability.

Away from construction there was better news on the overall business-sentiment front. The National Australia Bank’s survey showed firms assessment of business conditions perked up in April. That index rose to 14, to its joint highest since 2008 (confusingly the previous peak had been last month but that was revised lower). The long-run average for this series is way below current levels, at just 5.

Business confidence jumped to 13, NAB said, from just 6 a month ago.

Job advertisements also got a boost, in another sign of domestic economic health. They rose by 1.4% on the month in April according to Australia and New Zealand Bank. That was well above the 0.3% rise seen in March.

Overall the data paint a picture of an Australian economy in reasonable shape, but the collapse in building permits clearly flags a potential problem. Investors will be very keen to see what sort of trend develops, and we can expect unusual focus on this data next month. That said markets don’t expect any change in Australian interest rates this year, and possibly into next, even if they are reasonably certain that the next move will be a rise.

The Australian Dollar wasstruggling against its US cousin in any case and has been for some time. Interest-rate differentials are turning in the US’ favor and commodity prices have weakened, both of which have stymied the Aussie