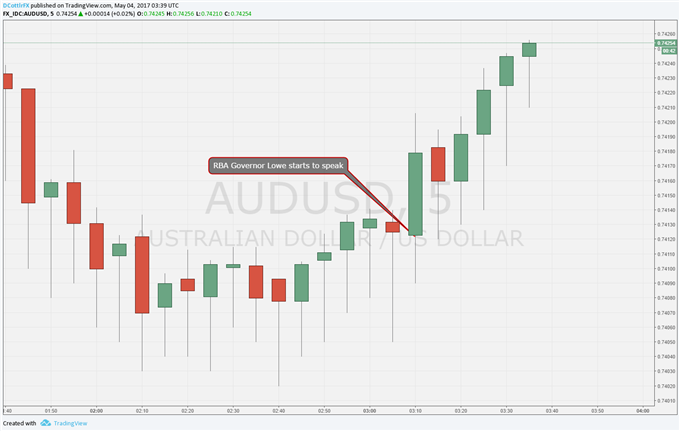 Track traders’ sentiment towards the Aussie Dollar and all the Asia/Pacific majors here.

The Australian Dollar was steady against its US counterpart Thursday following a speech from Reserve Bank of Australia Governor Philip Lowe.

In tone, it chimed with the already prevalent market view that the next move in record-low Australian interest rates will probably be higher, but that that move is not coming soon. Indeed, speaking in Brisbane on “Household Debt, Housing Prices and Resilience,” Mr. Lowe said as much.

“…at some point interest rates in Australia will increase,” he said.

“To be clear, this is not a signal about the near-term outlook for interest rates in Australia but rather a reminder that over time (author’s italics) we could expect interest rates to rise, not least because of global developments.”

Australian rate-futures markets have long priced an unchanged Official Cash Rate for the rest of this year, and much of next. So it would seem that Mr. Lowe has already got this message across. He publicly doubted that lower rates would answer any of Australia’s economic problems back in February.

He has however long fretted about household debt.Thursday found him still at it with particular reference to housing-market borrowings. Lowe did note that the Australian situation was different from that which pertained before the subprime market collapsed in the US. The RBA’s findings are that the largest debtors are the relatively affluent, rather than the lower earners who took out unpayable mortgages in the US.

Consequently, the RBA’s worry is not that the housing market could suffer when interest rates to rise. It’s that consumer spending will take a hit as more household resources go toward paying down debt. This is not the central bank’s only problem, however.

“In terms of resilience, my overall assessment is that the recent increase in household debt relative to our incomes has made the economy less resilient to future shocks,” Mr. Lowe said.The RBA places faith in macro-prudential measures to level the housing market out without torpedoing it, and hopes that Australian growth will pick up gradually, to average around 3% “over the next few years.”

All up this was a modestly upbeat speech, tinged with worries about debt but still hopeful that its effects can be contained. AUD/USD rose a little as Mr. Lowe spoke, getting up to 0.7245 from 0.74122 before he stood up.