The European Central Bank has held interest rates and left its quantitative easing program unchanged in its April rate decision. The move was widely anticipated, owing to still-weak inflation, muted wage growth and an uncertain outlook in the Euro area.

The interest rate on the main refinancing operations and the interest rates on the marginal lending facility and the deposit facility will remain unchanged at 0.00%, 0.25% and -0.40% respectively.

In a statement, the Governing Council said it continues to expect the key ECB interest rates to remain at present or lower levels for an extended period of time, and well past the horizon of the net asset purchases.

It confirmed that net asset purchases of €60 billion will run until the end of December 2017 or beyond if it “sees a sustained adjustment in the path of inflation consistent with its inflation aim”.

It added: “If the outlook becomes less favourable, or if financial conditions become inconsistent with further progress towards a sustained adjustment in the path of inflation, the Governing Council stands ready to increase the programme in terms of size and/or duration.”

Traders will now look for any change in the wording in Draghi’s press statement at 12.30 GMT, which you can watch here, and in the subsequent Q&A for any hints about prospective gradual QE reduction or rate cuts.

While inflation is still weak, the taming of the European political landscape and signs of improving economic data have given traders reason to believe that the ECB is considering how to best structure the tapering process in the future.

On Monday, Reuters reported that ECB policymakers might see scope for sending a small signal in June towards reducing monetary stimulus. This is thanks to the market’s assumption that the pro-European centrist Emmanuel Macron will become France’s next president, thus averting the threat posed by the Euro’s nemesis-in-chief Marine Le Pen.

Reuters cited “three sources on and close to the bank’s Governing Council”, one of whom said: “The discussion will be on removing some of the easing biases… I can’t say how quickly it will happen because that depends on the data.”

The ECB will be pleased by data earlier this morning that showed that Euro-Zone economic sentiment surged in April to the best level since August 2007. However, Draghi could easily play down the optimism following the first round of the French election and suggest markets wait until the second round is done and dusted.

EURUSD has dropped in the immediate aftermath of the ECB’s policy statement. 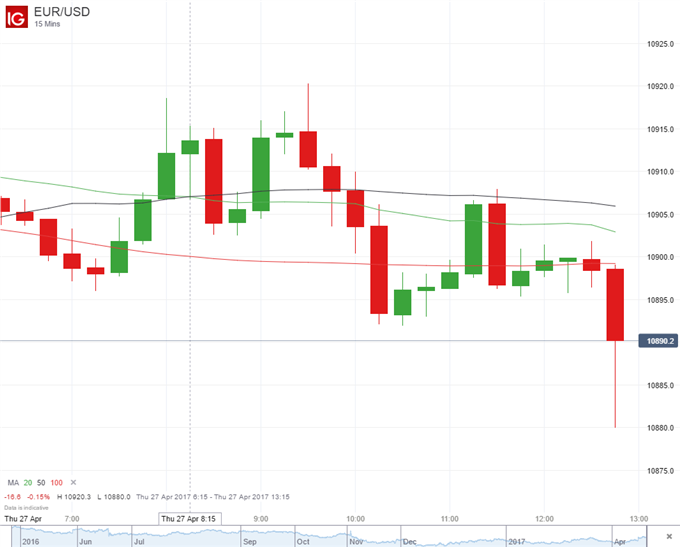 Volatility may follow on any tweaks in language from Draghi in his opening comments or in the Q&A. Any less-hawkish-than-expected rhetoric could dent the appetite in EUR crosses and boost European stocks.

However, any hawkish surprises could dampen stocks and reinforce the recent upward Euro momentum and help lift EUR/USD towards the 1.1000-level, especially given Dollar weakness. The Greenback was conspicuously unmoved by the long-awaited Trump tax reform proposal was released Wednesday.

Would you like to know more about financial market trading, or to get live coverage of major economic events? The DailyFX webinar s are for you.