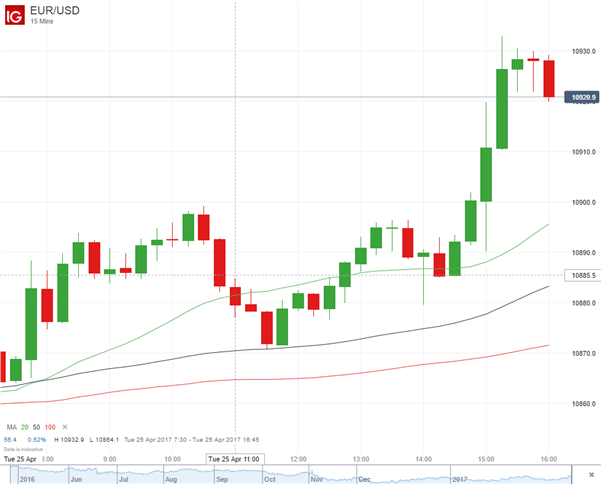 - Euro rises on reports that the ECB will signal a reduction of monetary stimulus in June thanks to the Macron affect.

- US stocks soar ahead of Trump’s tax plans.

After yesterday’s relief rally on the back of the first round of the French presidential election, the Euro is making fresh gains Tuesday on a report that the European Central Bank will adopt a shift in attitude at its monetary policy meeting in June.

Reuters reports that although policymakers at the bank are not likely to change their policy stance before then, they may see scope for sending a small signal in June towards reducing monetary stimulus.

This is thanks to the strong likelihood that the pro-European centrist Emmanuel Macron will become France’s next president, thus averting the threat posed by the Euro’s nemesis-in-chief Marine Le Pen.

Reuters cites “three sources on and close to the bank’s Governing Council”, one of whom said:“The discussion will be on removing some of the easing biases… I can’t say how quickly it will happen because that depends on the data.”

Here is the reaction in EUR/USD, which is now up strongly on the day, reaching a daily high of 1.09328.

EUR/GBP has also risen, to 0.8520, on the back of the news. European stocks, too, are continuing to rally.

US markets are also surging higher on the back of President Trump’s plans to slash the corporation tax rate to 15%, with the Nasdaq hitting 6,000 for the first time.