- British Pound hits a 33-day low against the Dollar.

The British Pound is hurtling to fresh lows, hitting a 33-day low against the Dollar in early Friday trading, after growth in its dominant service sector dropped to five-month low in February. The Markit/CIPS UK Services PMI Business Activity Index, released at 0930 GMT, fell to 53.3 in February from 54.5 in January, and missing the consensus forecast of 54. That’s still well above the 50.0 threshold that separates growth from contraction, but it revealed business activity expanding at the slowest pace since September 2016, with growth momentum easing further from the 17-month peak seen at the end of 2016.

The slowdown mainly reflected a softer pace of new business growth, which some respondents linked to more cautious spending among consumers. On the plus side, business confidence remained strong, with service providers indicating that optimism was little-changed from the post-referendum high recorded at the start of this year. The index was also broadly in line with its average for 2016 (53.2).

But Chris Williamson, Chief Business Economist at IHS Markit, said a further slowdown in UK business activity growth in February adds to evidence that the economy has lost momentum after the impressive expansion seen at the end of last year. And with manufacturing and construction PMI readings also both falling this week, Markit has revised its first-quarter GDP estimate down to 0.4%.

He said: “Weaker consumer spending was a key cause of slower service sector growth, suggesting that household budgets are starting to crack under the strain of higher prices and weak wage growth. The ongoing steep upturn in costs suggests that consumer price inflation has significantly further to rise, adding to our belief that inflation will breach 3% over the course of the next year.”

And as this rising inflation is due to Pound weakness and not stronger growth, the Bank of England is unlikely to alter its extremely accommodative monetary policy, which will also weigh on the Pound in the long term.

“The slowdown in the pace of economic growth signalled by the February data pushes the PMI surveys back towards territory more indicative of additional policy stimulus from the Bank of England than a tightening,” said Williamson. “Policymakers are therefore likely to continue to stress the need to look through any further upturn in inflation and focus instead on the need to keep policy accommodative in the face of a likely further slowing in the pace of economic growth in 2017.” 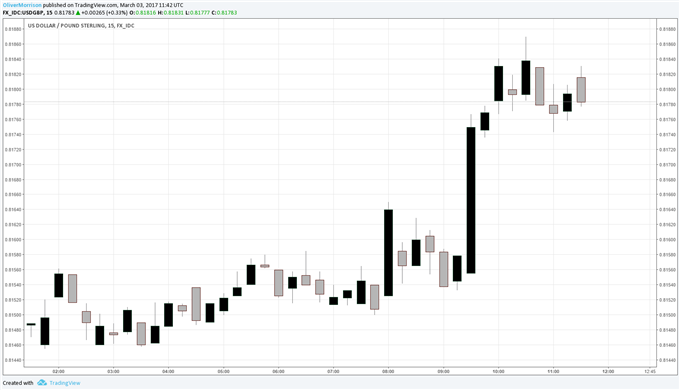