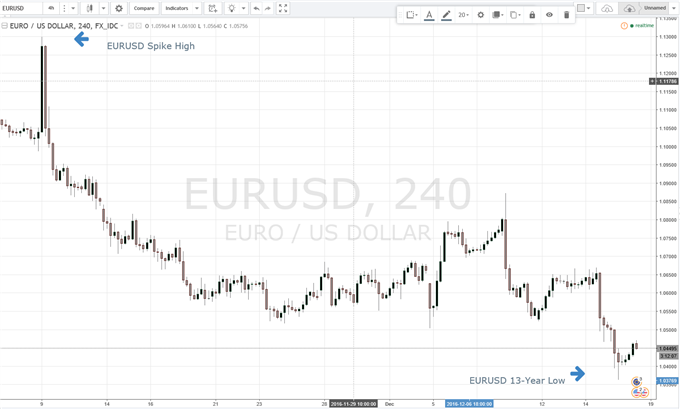 Final Euro-Zone inflation data for November showed that despite the central bank’s ultra-loose monetary policy, prices are going nowhere. Last month's CPI reading was confirmed at -0.1% with the yearly rate at +0.6%. The yearly core rate – CPI minus energy and food prices – was +0.8%.

The ECB will be pleased that, despite the lowly figure, annual CPI inflation at +0.6% is the highest since April 2016, and November marks the sixth consecutive month of rising prices. The fight against lowflation should get better for the central bank over the coming months, with higher oil prices and the weaker single currency expected to push inflation to around +1.5% in mid-2017.

The Euro recently hit a 14-year low against the US Dollar, under 1.0400, after the Fed, in the midst of hiking rates as anticipated, outlined a path to three rate hikes next year. The widening short-term interest rate differential between the two major currencies, currently more than two percentage points (2-year US-German yield spread has risen to ~205-bps) continues to drive EUR/USD lower.

ECB President Mario Draghi recently announced that he would extend the central bank’s bond-buying program to the end of 2017 but at a slightly reduced rate. By the end of next year, the ECB will have bought just over €2.2 trillion of bonds, including many at negative interest rates, to try and stoke growth and inflation across Europe. President Draghi may not stop there with the ECB flexible to continue to buy bonds if its inflation and growth goals are not met. Indeed, we don't believe the ECB's decision amounts to a 'tapering.'

The in-line data barely registered on EUR/USD, which has been under heavy downward pressure over the last few weeks. The pair hit a spike high of just under 1.13 in early-November before trading at a low of 1.03640 yesterday.