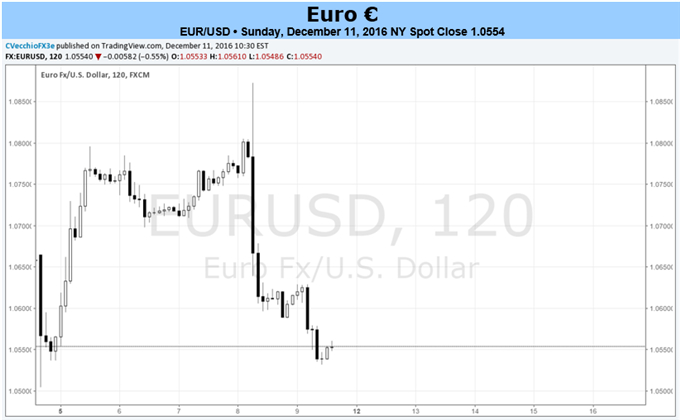 - ECB rate decision, despite talks of ‘tapering,’ was actually another steeper into the realm of easy monetary policy, which should hurt the Euro in the current rising rate environment.

- Markets have already priced-in a Fed rate hike on Wednesday; the debate is over how hawkish the Fed will be in its guidance.

EUR/USD had a volatile few days last week, trading as low as 1.0505 on Monday in Asia, before climbing as high as 1.0873 on Thursday in New York. Ultimately, though, with the European Central Bank’s surprise decision to open the liquidity spigot even further, the Euro shed ground across several major currencies; EUR/USD closed the week at 1.0554.

To be fair, heading into the ECB meeting, we were skeptical that Draghi & co. would be able to meet the market’s ‘Christmas List’ of wants. Yet the ECB did just that. Whereas market participants were looking for an additional €480 billion of asset purchases (six-month extension to bond-buying program at €80 billion per month), instead the ECB delivered a promise for at least €540 billion of asset purchases (nine-month extension at €60 billion per month).

Likewise, the ECB was careful to point out that this reduced pace of purchases does not equate to ‘tapering’: "If, in the meantime, the outlook becomes less favourable or if financial conditions become inconsistent with further progress towards a sustained adjustment of the path of inflation, the Governing Council intends to increase the programme in terms of size and/or duration."

Finally, the ECB announced that it would not only begin buying assets with yields below the deposit threshold of -0.40%, but it would buy bonds with YTM as low as 1-year (previously was 2-years). This is an important tweak to the implementation of QE. Primarily, this will now take buying pressure off the long-end of the yield curve as investors no longer need to front-run ECB action. The ECB can also drive down short-term rates even further now. In context of the current rising yield environment, steeper core sovereign yield curves could help shore up EUR/JPY; but the policy shifts could hurt pairs like EUR/GBP and EUR/USD.

While the ECB’s decisions will shape the Euro gradually over several weeks, traders should watch developments along two other lines more closely. First, in Italy, a new prime minister may be coming into power shortly. Italian Foreign Minister Paolo Gentiloni has been given a mandate to form a new government, and parliamentary approval will likely be given on Wednesday.

Wednesday will also bring about the last FOMC meeting of the year, but given the high expectations going into it, the Fed will need to take on a rather hawkish stance in order to see the US Dollar rally significantly further. EUR/USD itself may be currently predisposed for lower prices, but the FOMC meeting will only yield such a result of the Fed rate hike expectations curve steepens – a difficult scenario to envision seeing as how the Fed’s dot plot called for two rate hikes next year and markets are pricing in two for June and December. –CV