1. It was another rough patch of Chinese data released over the weekend, further indicating economic slowdown in the economy that’s created worry around-the-globe. This time it was a miss on industrial output, which for China is an extremely important number given their large-scale exporting activity: Industrial output printed at 6.1% for August from a year prior, below the expectation of 6.5% and Fixed Asset Investment printed at 10.9% v/s an expectation of 11.2%.

These prints are after five interest rate cuts and a flurry of government stimulus, highlighting concerns that Beijing may not be able to offset the selling that is taking place across their equity markets. The Shanghai Composite (shcomp) closed lower by -2.67% after being down by as much as -4.7% during the session, while the Shenzhen Composite (szcomp) closed down by -6.65% after a brutal session that saw persistent selling throughout with aggressive price action.

Correspondingly, the Nikkei moved lower by -1.63%, and as we looked at on Friday – this could be a favored way of playing the ‘panic’ theme in the coming weeks. Weakness in China is likely to have a big impact on Japan should this theme continue developing, and this could be seen in the currency market as well as across stocks. Short Nikkei and Long Yen (short USD/JPY) could be favored ways of playing risk aversion in the current environment. Below is the daily chart of the Nikkei, and notice the five consecutive daily wicks showing at the 18,215 resistance: This is a clear example of resistance in a market, and the recent post lower on this daily chart could be encouraging for the initiation of short positions. Stops could be placed at 18408, 18500 or 18752 based on how aggressively the trader wanted to treat the position. 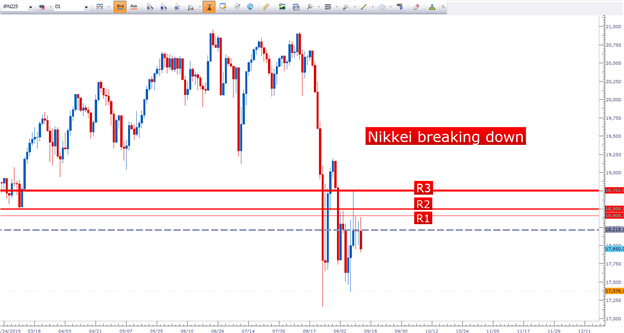 2. What’s up with the Euro? One of the topics noticeably absent from the headlines of recent have been Europe and perhaps of more importance for currency traders, EURUSD. As panic began to sweep the globe, in mid-August, EURUSD began to spike higher and many ‘pundits’ began to claim that the Euro had become a ‘safe-haven’ currency, and investors were loading into Euro-based investments to shield the storm.

For a currency that had traded lower by ~20% in a year representing an economy that had, only three months earlier, been mired in breakup-scenarios as we inched closer to a ‘grexit,’ this was a ridiculous assertion. David Rodriguez dispelled this notion of ‘euro as a safe haven’ in his article, ‘No, The Euro has not Suddenly Become a Safe-Haven Currency.’

More likely, the strength in EURUSD was from traders that were holding short positions closing their trades; often called ‘unwind.’ As the European Central Bank embarked on their first round of QE, and after Mario Draghi proclaimed that he and the bank would do ‘whatever it takes’ to salvage the Euro, investors looked to take advantage of yet another Central Bank intervention program by financing trades in Euros. And as the United States inched closer to a rate hike, or at the very least tightening of policy, a clear delineation had shown in the monetary policy of the two economies represented in EURUSD making for a an attractive carry trade. So as investors became more confident that the global economy would be ‘ok’ and that Europe would make it through their current debt stand-offs, short EURUSD became increasingly attractive. This is why the pair had moved down by as much as ~3,500 pips earlier in the year.

But as questions around that FOMC rate hike arose earlier in the year, and as issues such as falling oil prices and a Chinese slowdown became more prominent, the risk-reward of that short EURUSD carry trade no longer looked so attractive. This is what sidelined new sellers, and brought demand into the pair as those that had sold during the 3,500 pip down-trend looked to tighten up their risk and close their positions with the numerous question marks spinning around global markets. This is often referred to as a ‘short squeeze,’ and in the chart below – we highlight two different ‘bear flag’ formations that are indicative of such a scenario.

For now traders should be cautious with near-term short EURUSD positions. That short EURUSD trade could again become attractive, but not until we see a sense of calm come into global markets, at least enough to intrigue investors to jump back into the carry trade provided that the alarm bells stop sounding. 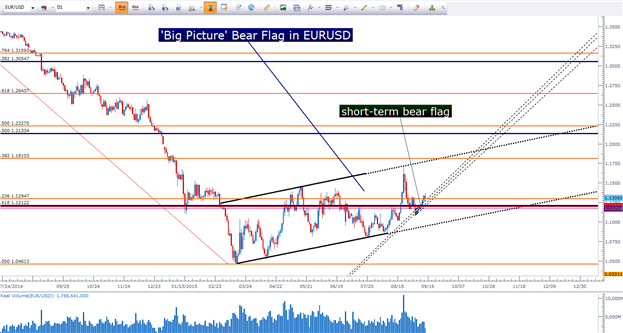 3. Stocks are congested and ready to break: Since the pandemonium of 8/24 has moved further into the rear-view mirror, investors have remained cautious ahead of Thursday’s FOMC announcement. On the S&P 500 specifically, the sell-off on 8/24 moved prices lower to test a six-year trend-line that’s been in effect on the index (shown on the left side of chart below). This set a low at 1,833.50, and since then the S&P has been working on lower-highs, and higher-lows; a hallmark of congestion as we near a ‘big event’ in a market. That big event is on Thursday, and if we haven’t broken through this near-term congestion (shown on the below chart, on the right), then Thursday will likely provide the catalyst to do so. 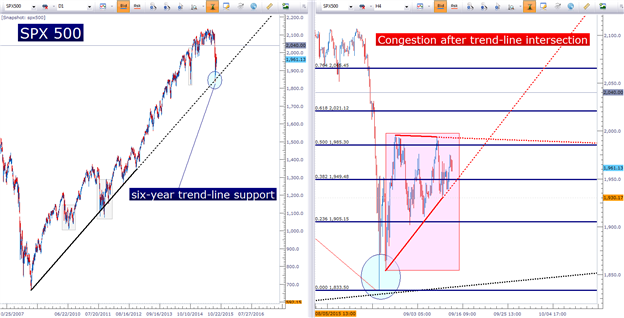