1. Global stocks steady ahead of the Fed: After three volatile weeks of price actionacross global markets, a sense of stability has begun to show over the past 24 hours as the world nears the much-awaited September FOMC meeting. While there are numerous headline-worthy events that can be assigned a primary role for the recent tumult across global markets, the uncertainty in the communication of the Central Bank representing the world’s largest national economy is likely a large driver of confusion and fear.

We’ve seen VIX surpass the value of the Russell-VIX six times since August 24th when the outsized sell-off in China began to hit the United States with aggression. Before August 24th – this had only happened twice in the prior 11 years; which of course includes the financial collapse.

This is a huge deal: Small-cap stocks, by nature, should be more volatile than their larger and significantly-more-established brethren. The fact that we are seeing so much brutal uncertainty in large-cap names just goes to show the unexpected consequences of ZIRP and the fact investors bought up shares in large-cap names due to a dearth of available options. With rates near zero, investors that would normally buy a corporate or agency bond were left without much yield. And with a surging stock market over the past 6 years that’s seen stocks trade at all-time-highs for over two-and-a-half years, buying ‘safer’ stocks in large-cap names could be seen as a very relevant way for an investor to build their portfolio in a low-yielding environment.

S&P 500 moving into symmetrical wedge as we near FOMC

2. So, it makes sense not to hike, right? Unfortunately matters aren’t so simple. We’ve been down a similar road before, and the results weren’t very positive. The Fed has talked up policy tightening over the previous three years, only to back off once volatility in markets showed the fragility of the ‘recovery.’ The Taper Tantrum of 2013 highlights this theme, but markets were reassured when the Fed made certain to point out that the end of QE did not mean rate hikes were imminent.

For three years, some Fed officials have been circling 2015 as the target year for ‘liftoff.’ Consistency is a fairly important trait in a Central Bank, and after the previous back-tracking that we’ve seen from the bank towards rate hikes, failing to hike again after numerous reassurances throughout the year would only serve to erode that confidence even more. And if we do happen to spiral into a global recession, that additional loss of confidence only makes the Central Bank more ineffective in trying to combat deflationary forces. The Fed has said that they’re ‘data dependent,’ and that the first rate hike doesn’t mean that second is coming anytime soon; so they’ve already tried to soften the blow of the impact from that first hike.

The United States has begun to see inflationary forces. The earmarks of ‘data dependency’ that the Fed has given for ‘liftoff’ have already been met, long ago. If they don’t hike, they risk losing confidence; and if, by chance, markets trade higher they run the risk of stoking even more excessive risk taking. This is how bubbles get built, if they aren’t built already. If they do raise the Fed runs the risk of putting the global economy in a tailspin, as nearly every emerging market in the world is facing pressure and both Europe and Asia teeter on the brink of economic disaster.

The worst-case-scenario here is that if the Fed does raise, and if the global economy does lurch lower – they may have to backtrack with even more ‘especially accommodative policy.’ This happened in Europe in July of 2011 when Jean-Claude Trichet hiked rates, only to reverse the decision later in the year as the European Debt Collapse began shortly after this rate hike.

Add to this the varying commentary that we’ve received from various Fed members, including the hawkish tone that Ms. Yellen took during her congressional testimony earlier in the summer, and confusion reigns supreme around this FOMC decision.

This is shaping up to be one of the most interesting Fed meetings in years. Currently, expectations are 28% for a hike September, 39.5% for October and 58.9% for December.

3. Most attractive markets to be positioning around right now: Much is up-in-the-air with this FOMC decision on the docket for next week, and many markets have begun to correlate along with risk trends. The ‘risk on’ and ‘risk off’ type of environment from 2012-2013 is back in markets where risky assets are pricing roughly in-line with each other.

For playing ‘everything will be ok’ or ‘risk on’: Short EURUSD, Short AUDUSD, Long USDCAD, Short Gold and Long Stocks (the larger the move down over the past few weeks, the more attractive the market for playing this theme).

But for those that want to try to avoid the risk on/off theme, an attractive area could be seen in emerging markets; because no matter what happens next week, emerging markets are likely in for some additional pain as the impact of low oil prices begin to show in the economic data. The downgrade of Brazilian debt to junk status yesterday highlights how drooping commodity prices can show up in future data prints; which can, then, bring on further economic weakness.

Of particular interest are short Mexican Peso and short South African Rand against the US Dollar. Both pairs put in exuberant runs higher as panic was setting in the environment, but this merely hastened their previous up-trends. With a sense of stability coming in markets over the past week, this has helped these setups move down to more reasonable prices to the point of offering attractive risk-reward ratios. Below is the current setup on USDMXN. 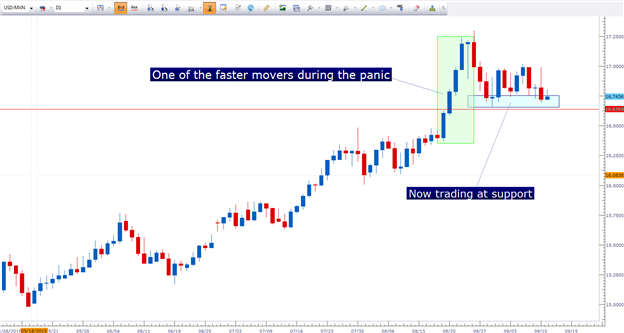