USD prices came under pressure throughout Wednesday’s trading session which pushed the DXY Index – a popular benchmark of major currency pairs reflecting broader performance in the US Dollar – approximately 0.15% lower to the 97.25 mark.

One possible explanation for weakness in USD price action could be the absence of demand for safe-haven currencies like the US Dollar, which likely results from an abundance of risk appetite stemming from President Trump’s official signing ceremony of his phase one trade agreement brokered with China. 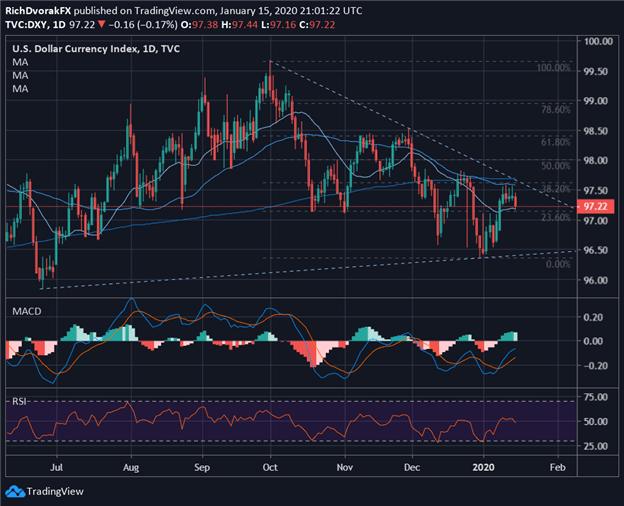 From a technical perspective, another rejection at confluent resistance near the 97.50 price level – underscored by the 50-day simple moving average the 38.2% Fibonacci retracement of the October 03 swing high recorded by the US Dollar Index – can also explain weakness in USD price action.

The US Dollar is now testing technical support potentially provided by its 20-day simple moving average and 23.6% Fibonacci retracement level, which rest slightly above the 97.00 handle. Potential for further downside in USD prices and retest of the December 31 swing low is noteworthy if the aforementioned area of technical support fails to keep the US Dollar afloat.

Shifting gears to focus on fundamental catalysts that may steer the general direction of USD price action, we find that the latest release of US advanced retail sales data is expected to cross the wires Thursday, January 16 at 13:30 GMT. A detailed list of scheduled data releases and event risk that impact the US Dollar can be found at the DailyFX Economic Calendar. 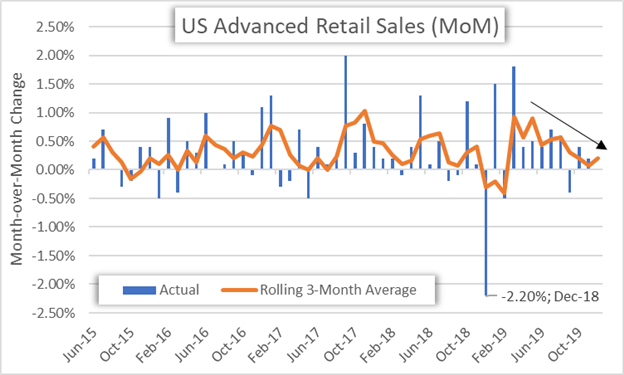 The US retail sales report could send USD rates spiraling lower if the data reveals that American consumers were feeling stingy this holiday shopping season and decided not to spend big. This is because the strength of the US economy is determined overwhelmingly by personal consumption expenditures.

Sustained sluggishness in retail sales growth might raise a red flag at the Federal Reserve and prompt forex traders to ramp up expectations for further accommodation from the FOMC. The US Dollar would likely be dragged lower in turn.

Another fundamental force dragging USD price action lower could be the persistence of daily liquidity injections from the Fed via its repo operations, which has inflated the central bank’s balance sheet by an alarming $400 billion since this past September.

Correspondingly, this increases the supply of USD circulating the financial system and could have, in part, contributed to the US Dollar Index’s 2.5% drift lower from last year’s peak. On that note, the New York Fed announced yesterday that it intends to keep the easy-money printing press on according to its latest repo operations schedule.