NZD/USD struggles to retain the advance following the Reserve Bank of New Zealand (RBNZ) interest rate decision as the decline global equity prices props up the US Dollar, and the exchange rate appears to be on track to test the August low (0.6489) as it extends the series of lower highs and lows from earlier this week.

NZD/USD may continue to reflect the inverse relationship between the US Dollar and investor sentiment as the exchange rate trades to a fresh monthly low (0.6536) and mimics the weakness in global equity prices.

The price action following the Federal Reserve interest rate decision suggests market participants wereanticipating a more dovish forward guidance as the central bankplans to “achieve inflation that averages 2 percent over time,” and a further shift in risk appetite may continue to drag on NZD/USD as the central bank appears to be in no rush to alter the path for monetary policy.

In contrast, the RBNZ looks poised to announce a package of unconventional tools at its last meeting for 2020 as officials “agreed that further monetary stimulus may be needed in order to achieve its remit objectives,” with the central bank insisting that “progress being made on the Bank’s ability to deploy additional monetary instruments.”

The RBNZ revealed that “the instruments include a Funding for Lending Programme (FLP), a negative OCR (official cash rate), and purchases of foreign assets,” and it seems as though Governor Adrian Orr and Co. is moving away from quantitative easing (QE) as “the Monetary Policy Committee agreed to continue with the Large Scale Asset Purchase (LSAP) Programme up to $100 billion.”

It remains to be seen if the RBNZ will tweak the LSAP after expanding the program in August, but speculation for additional monetary support along with the shift in investor confidence may produce headwinds for the New Zealand dollar ahead of the next central bank meeting on November 11 even though the crowding behavior in NZD/USD persist. 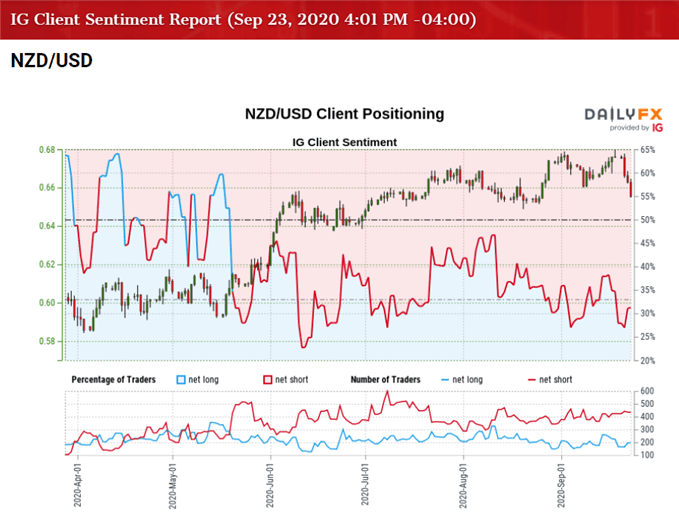 The recent jump in net-long position has helped to alleviate the tilt in retail sentiment as only 28.91% of traders were net-long NZD/USD earlier this week, while the decline in net-short interest could be an indication of profit-taking behavior as the exchange rate trades to a fresh monthly low (0.6536).

With that said, swings in investor confidence may continue to sway NZD/USD over the coming days as the US Dollar strength coincides with the decline in global equity prices, and the exchange rate appears to be on track to test the August low (0.6489) as it extends the series of lower highs and lows from earlier this week.