AUD/USD appears to be reversing course ahead of the 50-Day SMA (0.7149) as it quickly bounces back from a fresh monthly low (0.7192), and the exchange rate may stage a larger rebound ahead of the Federal Reserve interest rate decision on September 16 as key market themes remain in place.

AUD/USD is little changed from the start of the week after threatening the upward trend established in June, and the pull back from the 2020 high (0.7414) may turn out to be an exhaustion in the bullish behavior rather than a change in trend as the Reserve Bank of Australia (RBA) relies on its current policy tools to support the economy.

The recent tweak to the Term Funding Facility suggests the RBA is in no rush to deploy more non-standard measures as the central bank rules out a negative interest rate policy (NIRP) for Australia, and it seems as though the board will retain the current policy at the next meeting on October 6 as Governor Philip Lowe and Co. “consider how further monetary measures could support the recovery.”

Looking ahead, it remains to be seen if the RBA will adjust the forward guidance ahead of 2021 as the economic recovery is “likely to be both uneven and bumpy,” and the central bank may show a greater willingness to expand the scope of its yield target program as Governor Lowe and Co. insist that “further purchases will be undertaken as necessary.”

Until then, current market trends may keep AUD/USD afloat as the Federal Reserve’s balance sheet climbs back above $7 trillion in August, and the crowding behavior in the US Dollar may continue to coincide with the appreciation in the exchange rate as retail traders have been net-short the pair since April. 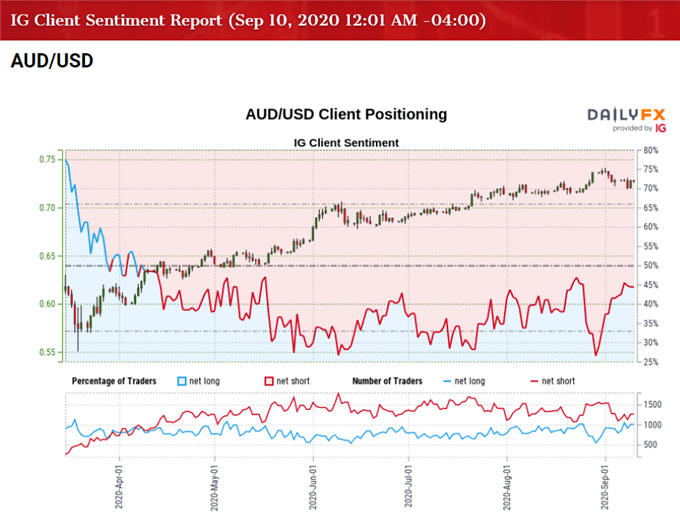 The rise in net-long interest has helped to alleviate the tilted in retail sentiment as only 37.17% of traders were net-long AUD/USD last week, but the recent pick up in net-short position suggests the crowding behavior in the Greenback will persist ahead of the Fed rate decision even though a bear-flag formation emerges in the DXY index.

With that said, AUD/USD may continue to exhibit a bullish trend as it trades to a fresh yearly high (0.7414) in September, but the break of trendline support keeps the 50-Day SMA (0.7149) on the radar as the Relative Strength Index (RSI) continues to pullback from overbought territory.