AUD/USD trades in a narrow range following the failed attempt to test the 2019 high (0.7295), but the Australian Dollar may continue to outperform its US counterpart as the Federal Reserve’s balance sheet climbs back above $7 trillion ahead of the Economic Symposium scheduled for August 27-28.

AUD/USD has appreciated approximately 30% from the March low (0.5506) as the Reserve Bank of Australia (RBA) sticks to a yield-target program, while the Federal Open Market Committee (FOMC) relies on its asset purchases along with its lending facilities to support the US economy.

Looking ahead, the different approach in managing monetary policy may continue to prop up AUD/USD as the reaction to the FOMC Minutes dissipates ahead of the Economic Symposium, and the pullback from the 2020 high (0.7276) may end up being short-lived as the central bank vows to “increase its holdings of Treasury securities and agency residential and commercial mortgage-backed securities at least at the current pace.” 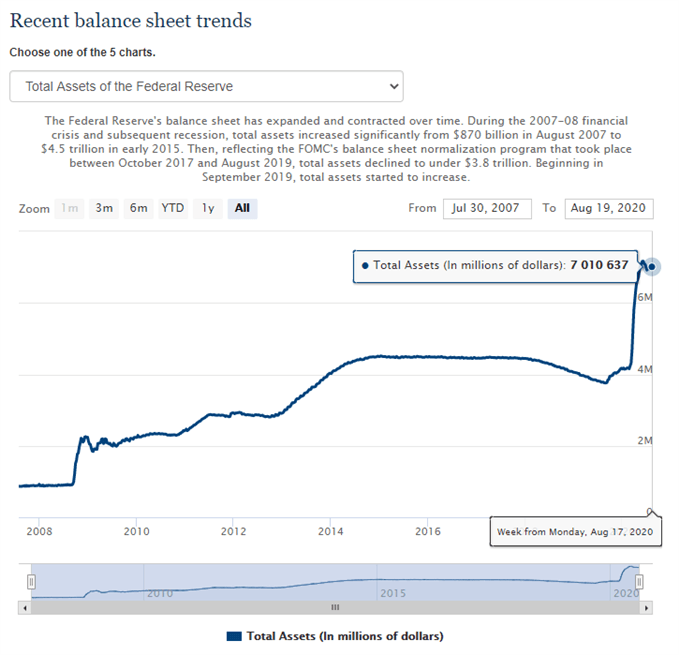 In turn, the Fed symposium may largely indicate more of the same for the next interest rate decision on September 16, and fresh remarks from Chairman Jerome Powell and Co. may do little to derail the appreciation in AUD/USD as the Fed’s balance sheet climbs above $7 trillion in August.

The widening balance sheet may continue to produce headwinds for the US Dollar as the FOMC appears to be in no rush to alter the path for monetary policy, but the crowding behavior in the Greenback looks poised to persist over the remainder of the month as retail traders have been net-short AUDUSD since April. 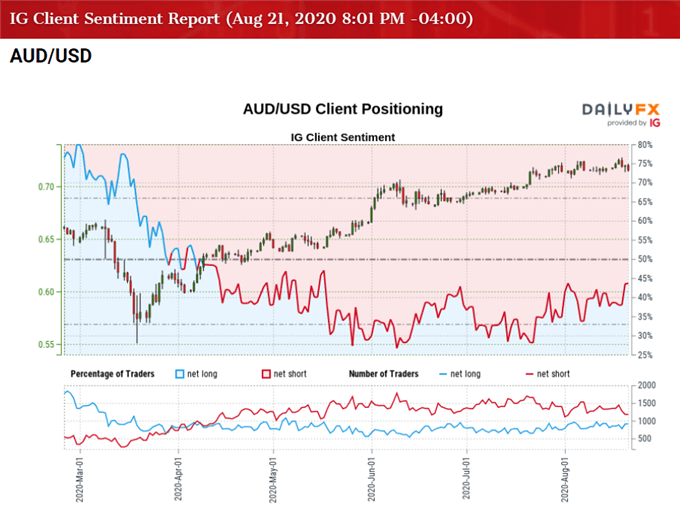 The rise in net-long position comes as the reaction to the FOMC meeting dissipates, with AUD/USD holding above last week’s low (0.7136), while the decline in net-short interest could be indicative of profit-taking behavior amid the pullback from the 2020 high (0.7276).

With that said, the 2019 high (0.7295) remains on the radar for AUD/USD as the crowding behavior in the US Dollar looks poised to persist, and the recent weakness in the exchange rate may turn out to be an exhaustion in the bullish price action rather than a change in trend as the Federal Reserve remains reluctant to scale back its emergency measures.

However, the technical outlook for AUD/USD is clouded with mixed signals as the Relative Strength Index (RSI) continues to deviate with price, with the oscillator snapping the upward trend established in July after failing to push into overbought territory.