AUD/USD attempts to retrace the decline following the Federal Open Market Committee (FOMC) Minutes as it bounces back from the weekly low (0.7136), and current market conditions may keep the exchange rate afloat as the crowding behavior in the US Dollar looks poised to persist over the remainder of the month.

AUD/USD pulled back from a fresh 2020 high (0.7276) as the FOMC Minutes foreshadowed a change in the monetary policy outlook, with the Federal Reserve mulling an outcome-based approach versus a calendar-based forward guidance as “a number of participants noted that providing greater clarity regarding the likely path of the target range for the federal funds rate would be appropriate at some point.”

However, it seems as though the FOMC is in no rush to alter the course for monetary policy as the committee vows to “increase its holdings of Treasury securities and agency residential and commercial mortgage-backed securities at least at the current pace,” and it seems as though Chairman Jerome Powell and Co. will stick to the status quo at the next interest rate decision on September 16 as the central bank extends its lending facilities through the end of the year.

At the same time, the Reserve Bank of Australia (RBA) Minutes suggest Governor Philip Lowe and Co. will also retain the current policy at the next meeting on September 1 as “the downturn in the first half of the year had been smaller than predicted,” and the central bank may carry out a wait-and-see approach throughout the remainder of the year as Treasurer Josh Frydenberg extends fiscal stimulus programs like the Jobkeeper Payment for six-months.

In turn, the RBA may continue to rule out a negative interest rate policy (NIRP) for Australia as “members agreed that the Bank's policy package was continuing to work broadly as expected,” and the limited scope for additional monetary stimulus may provide a backstop for AUD/USD as the FOMC shows little intentions of scaling back its non-standard measures in 2020.

As a result, the Australian Dollar may continue to outperform its US counterpart as AUD/USD approaches the 2019 high (0.7295), and current market conditions may keep the exchange rate afloat as the crowding behavior in the Greenback looks poised to persist over the remainder of the month. 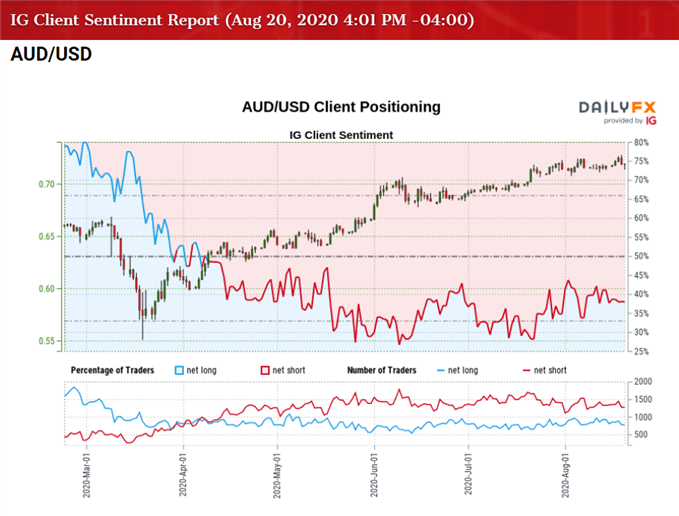 The recent rise in net-long position comes as AUD/USD bounces back from the weekly low (0.7136), while the decline in net-short interest could be indicative of stop-loss orders being triggered as the exchange rate trades to a fresh yearly highs in August.

With that said, the 2019 high (0.7295) remains on the radar for AUD/USD as it retrace the decline following the FOMC Minutes, but the Relative Strength Index (RSI) continues to deviate with price as the oscillator snaps the upward trend established in July after failing to push into overbought territory.