NZD/USD pulls back from the weekly high (0.6651) as the Federal Open Market Committee (FOMC) Minutes foreshadow a change in the forward guidance for monetary policy, and the exchange rate may face a more bearish fate over the coming days as the Relative Strength Index (RSI) establishes a downward trend in August.

NZD/USD struggles to retain the rebound from the monthly low (0.6519) as the FOMC Minutes reveal that “a number of participants noted that providing greater clarity regarding the likely path of the target range for the federal funds rate would be appropriate at some point.”

The comment suggests the Federal Reserve will adjust the monetary policy outlook over the coming months as the central bank mulls an outcome-based approach versus a calendar-based forward guidance, and it seems as though Chairman Jerome Powell and Co. will rely on its current tools to support the US economy as “most judged that yield caps and targets would likely provide only modest benefits in the current environment.”

It remains to be seen if the FOMC will scale back its non-standard measures ahead of 2021 as the central bank vows to “increase its holdings of Treasury securities and agency residential and commercial mortgage-backed securities at least at the current pace,”but a growing number of Fed officials may call on US lawmakers to further support the economy as “some participants observed that, due to the nature of the shock that the U.S. economy was experiencing, strong fiscal policy support would be necessary to encourage expeditious improvements in labor market conditions.”

Looking ahead, the FOMC Minutes indicate more of the same for the next interest rate decision on September 16 as “the Federal Reserve is committed to using its full range of tools to support the U.S. economy in this challenging time,” but the central bank may gradually adjust the forward guidance ahead of 2021 as “participants generally judged that the Committee's policy actions over the past several months had provided substantial accommodation.”

Until then, current market conditions may act as a backstop for NZD/USD as the crowding behavior in the US Dollar persists, with retail traders net-short the pair since mid-June. 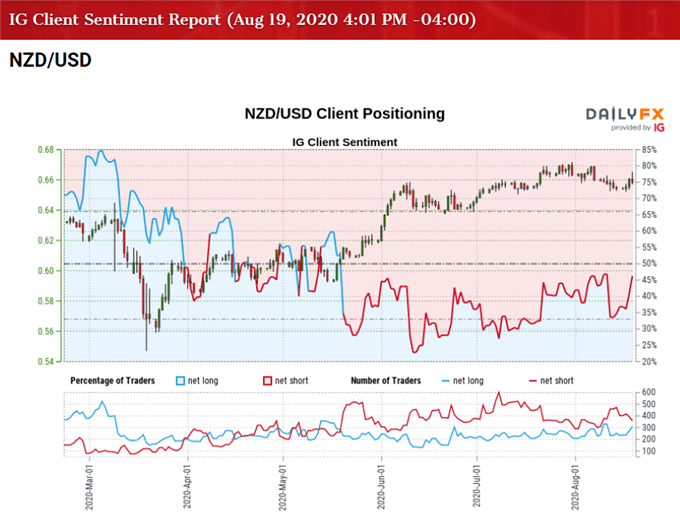 The rise in net-long position comes as NZD/USD tracks last month’s range, while the decline in net-short interest could be an indication of profit-taking behavior as the decline from the monthly high (0.6691) fails to produce a run at the July low (0.6440).

With that said, current market conditions may keep NZD/USD afloat as it trades within the July range, but the exchange rate may face a more bearish fate over the coming days as the Relative Strength Index (RSI) establishes a downward trend in August.