USD/CAD extends the rebound from the monthly low (1.3133) following the Federal Open Market Committee (FOMC) Minutes, and the Relative Strength Index (RSI) indicates a failed attempt to test the January low (1.2957) as it deviates with price after struggling to push into oversold territory.

USD/CAD initiates a series of higher highs and lows as the FOMC mulls an outcome-based approach versus a calendar-based forward guidance for monetary policy, and the lack of momentum to test the January low (1.2957) may generate a larger rebound even though the central bank appears to be in no rush to scale back its emergency tools.

However, it seems as though Chairman Jerome Powell and Co. will stick to the same script at the next interest rate decision on September 16 as the central bank extends its lending facilities through the end of the year, and the unprecedented efforts taken by the FOMC may continue to produce headwinds for the Greenback as the committee votes unanimously to push back “the expiration of the temporary U.S. Dollar liquidity swap lines through March 31, 2021.”

In turn, current market forces may carry into the month ahead as the FOMC notes that the recent decline in the balance sheet “was driven by the reductions in repo and U.S. dollar liquidity swaps outstanding,” and it remains to be seen if the crowding behavior in the US Dollar will persist as the central bank vows to “increase its holdings of Treasury securities and agency residential and commercial mortgage-backed securities at least at the current pace.” 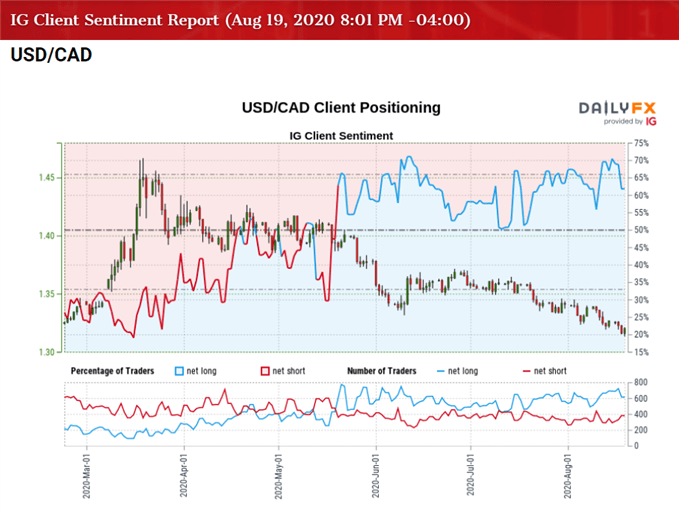 The rise in net-long position suggests the crowding behavior in the US Dollar will persist ahead of the next Fed meeting, while the rise in net-short interest comes as USD/CAD took out the March/June low (1.3315) during the previous week.

As a result, current market conditions may keep USD/CAD under pressure, but the decline from earlier this month has failed to push the Relative Strength Index (RSI) into oversold territory, with the indicator deviating with price as it appears to be reversing course ahead of oversold territory.