The price of gold approaches the yearly high ($1765) as the Federal Reserve’s balance sheet contracts for the first time since the outbreak of COVID-19, and current market conditions may keep the precious metal afloat as the reversal from the May low ($1670) appears to be gathering pace.

Goldtrades to a fresh monthly high ($1759) as the update to the Fed’s balance sheet shows total assets narrowing to $7.09 trillion from $7.17 trillion on June 8, and the price for bullion may extend the bullish behavior from earlier this year as it carves a fresh series of higher highs and lows. 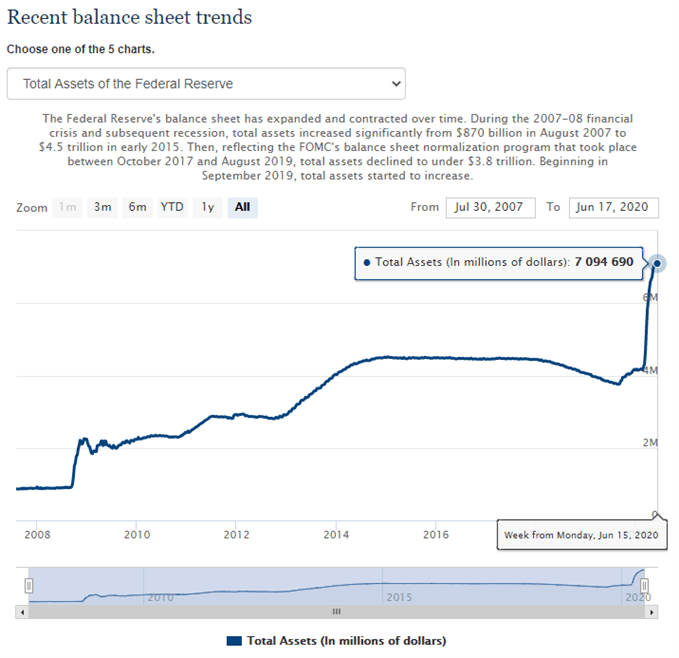 Gold has traded to fresh yearly highs during every single month so far in 2020, and the trend may persist despite the limited reaction to the Federal Reserve testimony as Chairman Jerome Powell vows to “increase our holdings of Treasury securities and agency mortgage-backed securities over coming months at least at the current pace.”

In turn, the contraction in the Fed’s balance sheet is likely to be short lived as the Federal Open Market Committee (FOMC) announces that the Secondary Market Corporate Credit Facility (SMCCF) “will purchase corporate bonds to create a corporate bond portfolio that is based on a broad, diversified market index of U.S. corporate bonds,” but it seems as though there’s little interest to implement more non-standard measures as the update to the Summary of Economic Projections (SEP) show “a general expectation of an economic recovery beginning in the second half of this year.”

Recent remarks from Fed officials suggest the central bank will carry out a wait-and-see over the coming months as Chairman Powell and Co. pledge to “evaluate our monetary policy stance and communications as more information about the trajectory of the economy becomes available,” and the FOMC may scale back the dovish forward guidance at the next interest rate decision on July 29 as Vice Chair Richard Clarida emphasizes that the committee “will wind down these lending facilities at such time as we determine the circumstances we confront are no longer unusual or exigent,”

With that said, the FOMC appears to be moving to the sidelines afterexpanding the scope of the Main Street Lending Program “to allow more small and medium-sized businesses to be able to receive support,” but the low interest rate environment along with the ballooning central bank balance sheets may continue to act as a backstop for the price of goldas marketparticipants look for an alternative to fiat-currencies.