Weekly Fundamental US Dollar Forecast: What’s Next for USD After Fed Meeting, NFP? 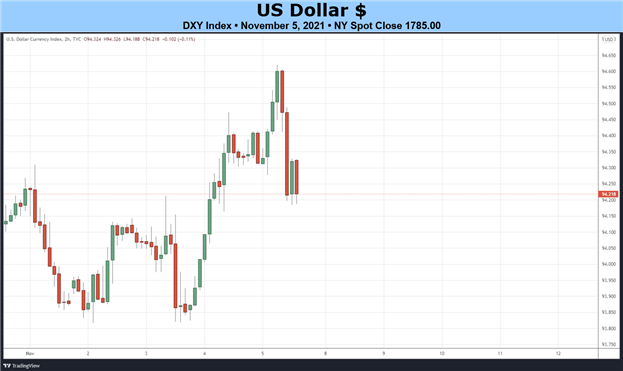 The first full week of November saw the US Dollar (via the DXY Index) hit fresh yearly highs in the wake of the November Fed meeting and the October US nonfarm payrolls (NFP) report, only to give back some of the gains by the time trading ended on Friday. EUR/USD rates, the largest component of the DXY Index, actually gained +0.06% over the week. USD/JPY rates dropped by -0.52%, while GBP/USD rates had the greatest influence over the DXY Index despite only being the third largest component, falling by -1.38%.

Elsewhere, among non-DXY components, the greenback fared well: AUD/USD rates dropped by -1.59% and NZD/USD rates traded down by -0.72%. Mixed seasonal tendencies favor more of the choppy trading in the US Dollar, broadly speaking, over the rest of November.

The shift into the middle of November will produce another full schedule of event risk based out of the US. After the October US NFP report, and now that the Fed’s communication blackout period is over, several Federal Reserve speakers will be in focus. Most of the significant events and data releases arrive in the first half of the week, ahead of Veteran’s Day on Thursday (federal holiday).

The next update to the 4Q’21 Atlanta Fed GDPNow growth forecast is due on Wednesday, November 10 after US wholesale trade data and the US consumer price index are released.

We can measure whether a Fed rate hike is being priced-in using Eurodollar contracts by examining the difference in borrowing costs for commercial banks over a specific time horizon in the future. Chart 2 below showcases the difference in borrowing costs – the spread – for the November 2021 and December 2023 contracts, in order to gauge where interest rates are headed by December 2023. 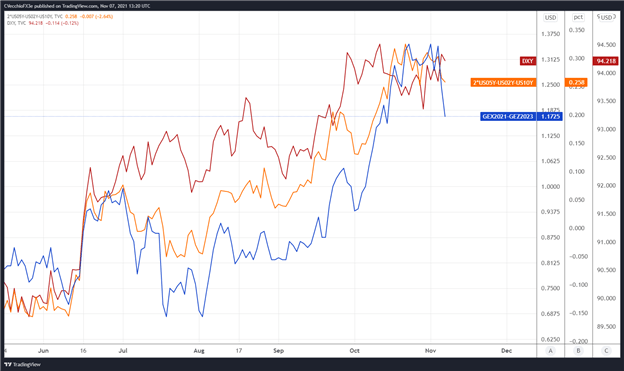 While the above metric was indeed prescient in anticipating a more hawkish Fed at the November meeting, the relationship between the US Treasury yield curve and Eurodollar futures suggests that the market may have been too aggressive in its pricing about how quickly the Fed will act to raise rates once the taper is complete in the wake of Fed Chair Powell’s press conference and the October US NFP report. 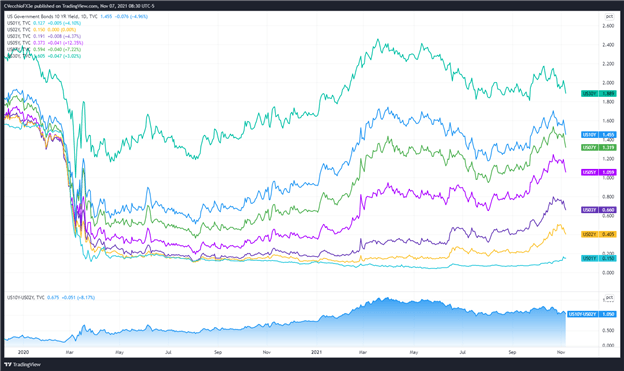 Historically speaking, the combined impact of falling US Treasury yields – particularly as intermediate rates outpace short-end and long-end rates – alongside dropping Fed rate hike odds has produced a mediocre if not unfavorable trading environment for the US Dollar. 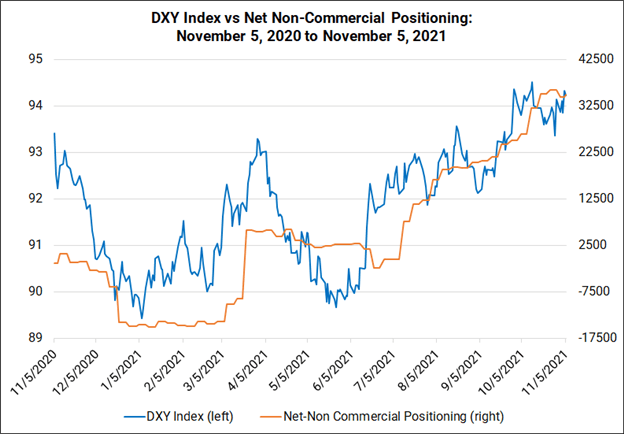