The haven-linked US Dollar wrapped up a mixed week as the Greenback trimmed most of its gains into the latter half of the past 5 trading days. Sentiment notably improved on Thursday and Friday as the S&P 500 and Dow Jones pushed higher. On the chart below, you can see the close inverse relationship between the US benchmark stock index with the US Dollar. Sentiment will likely continue driving Greenback price action.

Investors seemed to cheer remarks from US and Chinese officials vowing to implement the ‘phase-one’ trade deal after fears of trade war escalation casted uncertainty into markets. Meanwhile, ebbing coronavirus cases and fatalities kept traders looking forward to a gradual reopening of state economies. New York Governor Andrew Cuomo noted that they are ‘finally ahead’ of the virus. 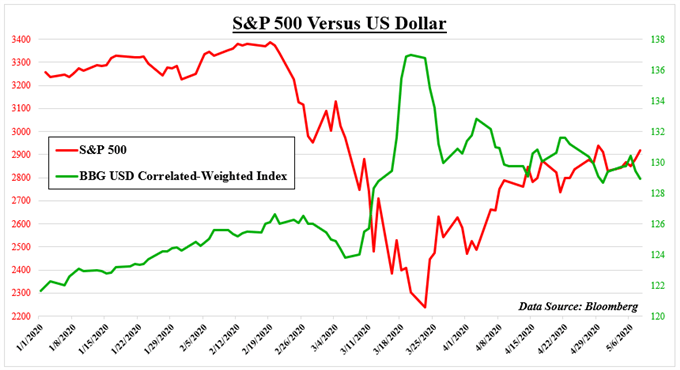 USD Road Ahead - Markets Missing the Prior Urgency and Tempo of Extraordinary Stimulus?

Thus far, dismal local economic data has been struggling to materially shift the cautiously upward momentum on Wall Street. Last week, the US unemployment rate shot higher to 14.7% as non-farm payrolls contracted a record -20.5 million. Granted, these readings were not quite as dismal as economists were estimating. Jobless claims also rose over 3.1 million in the last week of April as lockdown measures took its toll on the economy.

The markets may be hopeful for the future. Primarily, that growth should pickup on an upbeat tempo, pouring cold water on current mind-boggling data. In Australia, the RBA predicted that this year’s anticipated negative GDP print will be reversed in 2021. The Bank of England also envisioned a similar scenario as it left rates unchanged last week. These assumptions do however acknowledge the risk of a prolonged dent to growth.

It is also becoming increasingly apparent that the speed and urgency of passing additional stimulus measures seems to be cooling. The slowdown in US virus case growth has also been accompanied with an ebbing expansion in the Federal Reserve’s balance sheet – see next chart below. In fact, on Friday the Fed announced that it continued to slow the pace of Treasury buying to US$7 billion per day, down from $8 billion prior.

US President Donald Trump acknowledged last week that he said he is ‘not in a rush’ for the next relief measure. The speed of the recovery on Wall Street has likewise been slowing. That could make it increasingly difficult for equity markets to set new highs absent a further material improvement in economic conditions. The risk also remains that as sates reopen, virus cases rise, opening the door to reversing lockdown easing.

With that in mind, it is a neutral call for the US Dollar fundamental outlook. Check out the newly-enhanced DailyFX economic calendar for a detailed overview of additional economic event risk ahead. 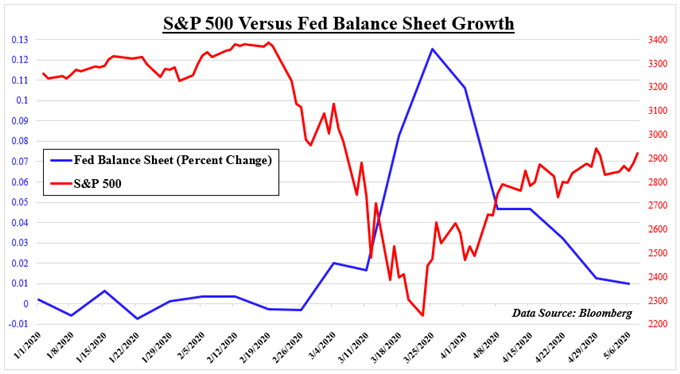