What Does Trader Positioning Say About Wall Street and the Australian Dollar?

In this week’s session, I resumed the discussion on how retail positioning – via IG Client Sentiment – can impact the trajectory for Wall Street and thus impact the growth-linked Australian Dollar. Last week, retail clients were selling as equities climbed. Since then this has slowed, indicating that perhaps from a contrarian standpoint, the “risk-on” vigor could be increasingly difficult to sustain from here.

According to IG Client Sentiment (IGCS), about 37.70% of traders are net long the Dow Jones at the time of writing. This is up from about a 27% upside bias when the index was trading into the end of last week. Since then, prices have declined almost 4 percent. The number of investors net long are about 4.27% lower than yesterday while at the same time up 8.07% from last week.

We typically take a contrarian view to crowd sentiment, and the fact that traders are net short could imply that prices may continue rising. However, the combination of current sentiment and recent changes offers a mixed Dow Jones trading bias. A further uptake in investors attempting to go long into incoming price action could shift that outlook to a bearish setting and vice versa. 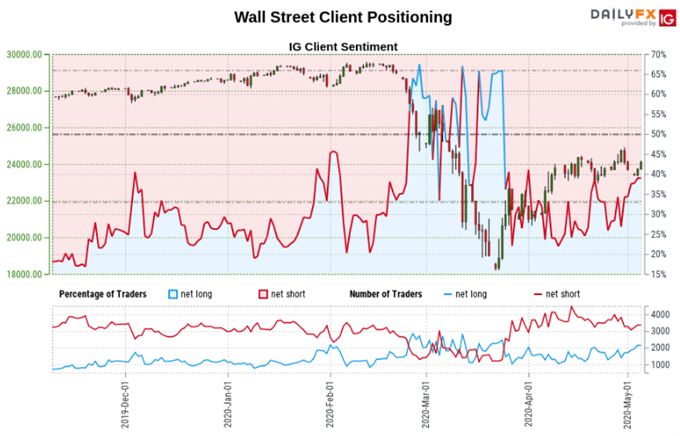 From a technical standpoint, the Dow Jones appears to be seeing fading upside momentum. Combining prominent trend lines on the 4-hour chart below shows that the slope of appreciation is fading. This comes particularly after prices rejected the inflection point from late February between 24675 to 25020. A turn lower places the focus on 23208 towards 22815. Otherwise a climb above “potential resistance” exposes 24327.

About 48.13% of retail traders are net long the sentiment-linked Australian Dollar against the US Dollar. Those net long AUD/USD have increased by 12.63% and 12.17% over a daily and weekly basis respectively. From here, recent changes in sentiment warn that the current price trend may soon reverse lower despite the fact traders remain netshort. That could speak to a rising share of traders attempting to pick potential bottoms. 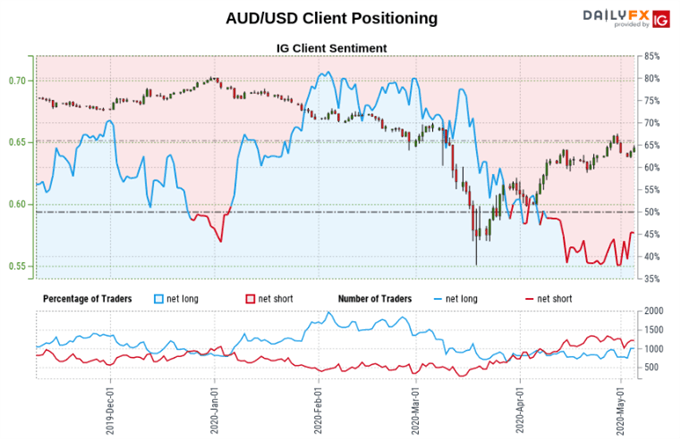 AUD/USD may be at risk to a material bearish shift in its price trend after the pair took out rising support from March – blue lines on the 4-hour chart below. Prices did bounce off former resistance-turned-support at 0.6385 – 0.6407. A descent through this area exposes what appears to be the next major area of support between 0.6250 – 0.6266. Resuming the uptrend entails closing above 0.6570.