US Dollar Outlook Bullish Ahead of FOMC, Retail Sales, CPI

The US Dollar may rise following the FOMC rate decision and outlook if officials re-affirm their commitment to data-dependence. Fed Chairman Jerome Powell said the central bank is unlikely to cut rates unless economic conditions become “materially” worse. The release of CPI and retail sales data may also give the Greenback a boost if the statistics give the Fed impetus to hold rates, though external risks could curb USD’s gains.

Markets are overwhelmingly expecting for the Fed to hold rates at 1.75 percent. Therefore, the source of volatility will likely come from their outlook rather than the decision itself. Fed officials including Mr. Powell himself have praised the tight labor market and cited it as an example of strength underpinning the US economy. However, he did warn of alarming trends in CPI and manufacturing which could alter the outlook.

Softer manufacturing data has led to what some are calling an industrial recession in large part caused by the US-China trade war. A growing concern is weakness in manufacturing will spill over into the services sector which has remained relatively resilient. The disinflationary pressure from the trade spat is also a growing concern as it undermines price growth and pressures the Fed’s commitment to keep inflation at 2 percent.

Will US Economy Experience Recession?

The short answer appears to be “for now, no”. The moat of a strong labor market has kept the woeful recessionary forces at bay, which is why data from the services sector carries a high premium in market attention. If investors begin to see weakness there, Fed rate cut bets will likely build at the expense of equities and the US Dollar as its attraction as a yield-instrument fades.

However, amid anticipations of a recession, the shift of focus from chasing yields to preserving capital may act as a buffer to US Dollar losses. As the global reserve currency with unparalleled liquidity, it becomes the preferred currency to cash out in the event of a downturn. This is due to its ability endure significant capital inflows and outflows without significantly moving in value. 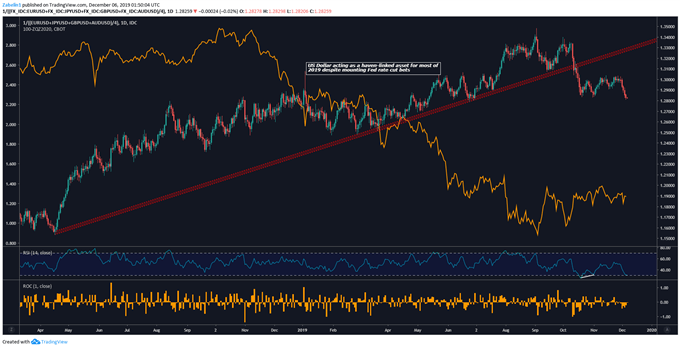 US-China Trade War: Will There be a Deal?

US-China trade talks continue to encounter stumbling blocks, with the most recent one being the passage of the Hong Kong Human Rights and Democracy Act. Beijing responded, threatening unspecified countermeasures and a heavy condemnation of what they believe is US interference. This came shortly after Beijing extended an olive branch to Washington by announcing a harder crackdown on IP violations.

The various roadblocks have pushed the timeline for achieving a phase 1 agreement in their multi-sequential trade accord into early 2020. Despite seemingly hollow assurance from Washington officials that talks are going “well”, markets appear unconvinced as the potency of these remarks to elicit hope has waned. Last week, an auction for US Treasuries showed demand far exceeded supply as doubts grew about a trade resolution.

The UK election is due to take place on December 12, and if Prime Minister Boris Johnson is able to secure a majority, it would likely boost sentiment since it may reduce the likelihood of a no-deal Brexit. The Fed has reiterated that trade wars and the EU-UK divorce have been calculated into the Fed’s outlook since they both pose heavy downside risks. A Conservative win might cool 2020 rate cut bets and boost the US Dollar. 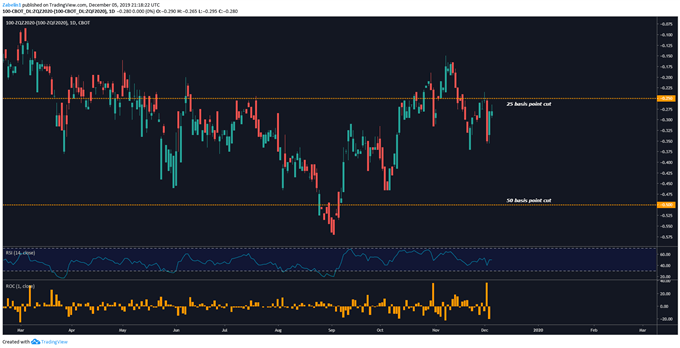