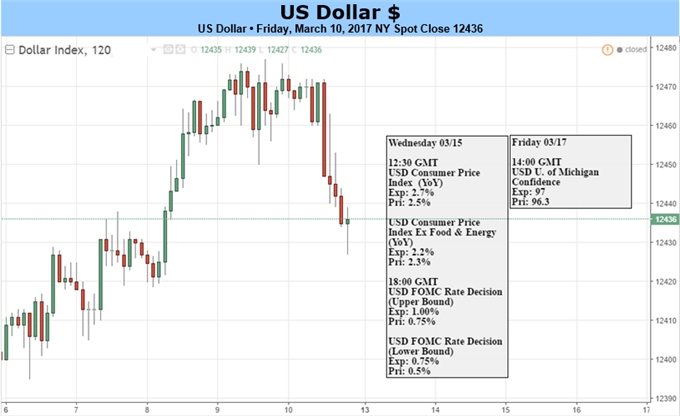 Despite a remarkably robust set of economic data – that included strong February payrolls – and a rise in rate expectations to the point of certainty that the Fed will hike Wednesday, the Dollar lost ground this past week. It isn’t that there is some hidden element to the scheduled event risk that makes it ultimately disappointing. Rather, speculation has reached well beyond the bounds of reasonable objective, and further that its most important counterparts may be gaining ground on its seemingly unassailable fundamental perch. This is how ‘good news’ can be met with disappointing response.

This past week, we were offered fundamental support that just seemed indulgent against the already hard fought speculation the Dollar built upon over the past three years. The top event risk for the period were the February labor statistics, which offered roaring support for the economy and plenty of motivation for the Fed. The net payrolls offered a hearty beat for the third straight month, the jobless rate ticked lower to anchor to the multi-year low, wage growth picked back up to its most hearty pace in years and underlying figures showed better foundation to this general theme. As encouraging as that may be economically, traders say little additional opportunity to draw from that information. The had already leveraged their forecast for a rate hike at the March 15 FOMC meeting to 100 percent (via Fed Fund futures) after Wednesday’s ADP private payroll report.

Markets are forward looking and speculatively motivated. This is where the ‘buy the rumor, sell the news’ saying originates. We should consider this heavy skew heading into the new trading week. We may consider the Fed decision a far more influential event relative to the NFPs, but financial media prominence does not change the interpretation the market will make of the news. A rate hike alone is already expected. Furthermore, we can tell from rates markets that there is considerable speculation of a further two to three hikes through the rest of the year. While it is possible to further shift expectations towards four hikes in 2017 – which is not fully appreciated – the need for conviction is high and the traction it would offer is comparably marginal.

The more remarkable impact via US monetary policy would be if the Fed disappointed – and that is easier to do. A hold on rates would certainly qualify; and while the Dollar is still in a more hawkish bearing than its major counterparts, the speculative saturation would likely lead to significantly fallout. Yet, even in more favorable scenarios, the currency may find struggle. Given the market’s implicit assumption of an accelerated pace of hikes, the likely reiteration of ‘gradual’ for future pace simply to ensure speculative appetites don’t run roughshod over the economy could nevertheless translate into slow against such a fast backdrop.

Perhaps more remarkable in positioning disappointment in the Dollar’s favorable bearings is the improvement of the currency’s major counterparts. This is a relative market and one of the Greenback’s strongest qualities over the past five years has been the weaker assessment and forecast for its most liquid counterparts. That ‘best of the worst’ title is no longer appropriate however. Growth has returned to the world’s largest developed economies. Despite unique risks for most of them, stability has prevailed. And, now, it even seems that the promise of rates is starting to return. The reasonable ends of extreme dovish monetary policy was generally shaped over the past few years, but that would precede an actual turn to normalization to close the gap with the Dollar and Fed. A tangible step was offered through the end of this past week when it was reported the ECB discussed the possibility of hiking rates before QE purchases ended at the close of 2017.

Where the Dollar still has the advantage on growth and yield potential, its premium doesn’t seem to be growing. It may in fact be shrinking. Unless full-scale risk aversion revives the USD’s appeal as an absolute haven, its unchallenged bull trend may be challenged. - JK