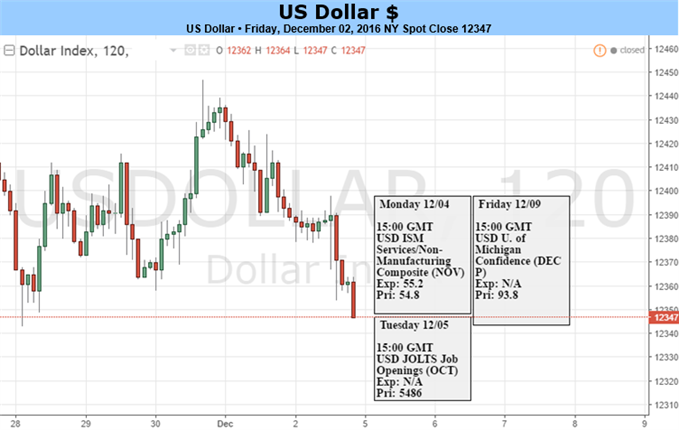 • Rate forecasts of a December 14 FOMC hike are still at 100 percent, which makes a wait-and-see that much less likely

• See what live coverage is scheduled to cover key event risk for the FX and capital markets on the DailyFX Webinar Calendar.

Both the Dollar and benchmark US equity indexes were positioned for a dramatic move through the end of this past week. Recent consolidation at their respective highs (13 year for the currency, record for S&P 500) could have been charged for the next leg of incredible rallies. Or, the swell of speculative expectation could have collapsed with the sign of unstable waters. Ultimately, both market bearers were left in a lurch to close out the week. Both closed out the week modestly off their respective peaks with very provocative technical patterns. While the Dollar’s focus has centered heavily on Fed speculation, it is unlikely that the market can simply hold this unsteady balance until December 14th (the final FOMC meeting of 2016). Rate speculation and the US election afterglow are likely to ease back at least temporarily while crucial cross winds jostle the Dollar.

Through the past week, we have seen the Dollar’s two most productive themes lose significant traction – which makes the fundamental cues moving forward much less predictable. The multi-week rally following the November 8th election was already fading at the start of the past week. Expectations for fiscal stimulus and a diverted course of growth potential amid the threat of trade barriers was already fundamentally stretched. Details of the bombastic proposals were needed to fill the speculative gap and concerns of a global slowdown amid protectionism started to push back. While the headlines of new appointees, conversations amongst leaders (a conversation between Taiwan and Donald Trump caused a stir) and other transitional milestones will further shape expectations; clear developments are unlikely until 2017.

For Fed speculation, the catalysts and market expectations are easier to trace. However, this is a theme that has been pushed to an extreme and doesn’t offer balanced opportunity for Dollar traders. The market-derived probability (from Fed Funds futures) of a Fed rate hike on Wednesday, December 14th has stood at 100 percent for a few weeks. That is remarkable given the skepticism that the market held relative to the central bank’s own forecasts since it first projected a move to normalize. To further the hawkish sentiment, we need to see confidence of subsequent moves – another hike on February 1 or March 15 and beyond – make serious headway. Currently, the probability of a further hike at the first 2017 meeting is only 10 percent, while a second move in March is calibrating a 22 percent chance. The scale of event risk necessary to bolster that degree of hawkishness look to be in very short supply short of the actual year-end FOMC meeting.

In contrast to the hawkish perspective, a retreat in speculation is much easier to encourage and the impact of such a shift would be far more severe. While the Fed has made a concerted effort to acclimate the markets to the reality of an eventual hike in their aim at transparency, they have promoted another speculative overshoot. Rate setters have also kept their qualifier of market stability in place through all individual speeches and official transcripts. Should volatility rise and/or an ill wind rise from international financial shores; it would be in character for the Fed to default to caution and hold. Such an outcome though would catch the speculative rank off guard.

The docket for the upcoming week holds a number of events that can waver rate speculation modestly – from the ISM’s survey sector survey to third quarter change in net household wealth to the University of Michigan’s consumer confidence report. Yet, the more capable and likely sparks are likely to come from abroad. We’ve seen the Dollar draw much of its strength over the past months from the weakness of its largest counterparts. Yet, that relative value consideration works both ways. Through one of the world’s most liquid financial assets – EUR/USD – the Greenback will feel the pressure from the Italian Referendum and ECB rate decision. A ‘no’ vote for the former could put the country’s government in disarray and raise fears over European and Euro stability. A ‘yes’ vote could help revive the Euro at the Dollar’s detriment. Meanwhile, the ECB rate decision represents a possible tipping point for one of the largest stimulus programs currently employed. If the group announces a necessary taper, it could significantly reduce the uniqueness and premium of Dollar hawkishness