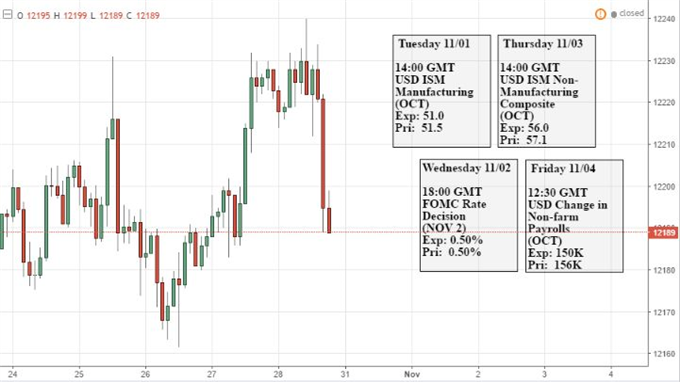 What fundamental winds bode well for the US Dollar and which portend trouble? There are simplistic expectations set out for the world’s most liquid currency, and that can lead to misconceptions and unwanted surprise for traders. The interest rate advantage that the Greenback has rode through these past months and years can quickly turn into a burden. Meanwhile, the readily accessible safe haven identity that purloins so much optimism can flip the Dollar should an increasingly-likely confidence stumble occurs in the face of heavy event risk. This benchmark currency is turning into one of the more complicated yet highly-susceptible-to-volatility instruments in the financial system.

Like a beacon through the rough fundamental seas ahead, the FOMC rate decision on Wednesday will call traders forward. As the most bold central bank (the only major institution to hike thus far) fronting the world’s largest economy, the Fed’s actions carry a strong influence. Yet, that does not imply a necessary outcome. Despite the group’s effort to try and acclimatize the market to an eventual second rate hike in its very slow pace of normalization, a move at this time would be self-sabotage. While the Fed targets inflation and employment, it is also primarily interested in financial stability. That said, a highly experimental second rate hike in an increasingly anxious market when there is a very contentious US Presidential Election less than a week away; is too likely to trip risk aversion.

In the event that the Fed were to hike, it would be an extreme reaction. The Dollar’s rally would likely be quickly snuffed out by the slump in general capital markets which could in turn translate into economic uncertainty. The lift in the Greenback is currently founded on expectations of tightening further out, not on the measly 25 bps of tightening from last year and another 25 bps this year. A slump in financial system and growth expectations would scuttle future normalization and undermine the Dollar’s yield premium. It could in turn revive its safe haven status should fear grow extreme, but there is a lot of ground to lose before that extreme is reached.

The Friday NFPs and Fed’s preferred inflation figures (PCE deflator) would be more effective Dollar boosters on the back of rate expectations without triggering the shock that an actual move would entail. That said, we don’t need to rely on the Fed itself to stir the risk pot. There are more than a few points of tension already rising in the global markets. The USD/CNH’s climb to record highs is putting the spotlight on China’s financial stability and strategy. Monetary policy is losing traction and central banks are making moves that look like slow capitulation. And, the US Election countdown is clearly amplifying the headlines. That same, unusual Dollar-sentiment dynamic can play out.

Though there are a lot of direct fundamental sparks to move the Dollar in the week ahead, we should still keep sight of the crosswinds. Much of the Greenback’s movements these past weeks have come on the basis of weakening counterparts. Motivated counter currencies can keep the pressure – bullish or bearish – on the Dollar moving forward. Themes of Brexit, China devaluation, faltering Eurozone stability and BoJ capitulation stand ready to move the needle. – JK