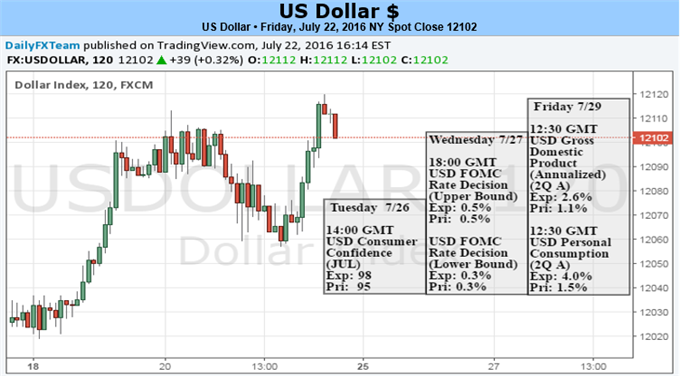 USDollar Looks to Fed, US GDP, Struggling Euro and Yen to Guide It

The USDollar has advanced for five consecutive weeks – although the pace hardly resembles the unconstrained bull trend through the first quarter of 2015. Fundamental appeal for the Greenback is thawing just as the docket looks to deliver explosive event risk like the FOMC rate decision and 2Q US GDP update. The list of ground-shaking updates – such as the aforementioned – and hearty tab of slightly more terrestrial listings presents a high probability of exceptional volatility. However, those same erratic conditions can undermine the development of consistent trends. Will the headline-crowding local event risk align to the heavy drivers from abroad to provide a trend, or will there be so much conflict that any violent activity stays contained to its 18-month range?

Heading into the new trading week, it is immediately apparent that whether we are looking for scheduled motivation from the US or abroad to engage the Dollar; it is likely to come in the second half of the week. The bulk of the heaviest-hitting data, meetings and speeches are Wednesday or later. Top listing for the global financial media is Wednesday’s FOMC rate decision – yet I do not believe it carries the greatest market-moving potential of all the items. Monetary policy as a general theme is growing in prominence once again, and speculation surrounding the Fed’s path to normalization is intensifying – though perhaps not for the same reasons that we have seen in the past.

Through previous phases of Dollar advance (such as the 9 consecutive month rally through March 2015), much of the lift came through the competitive yield view of the US in contrast to its liquid counterparts. The probability that the Fed would lift rates – even if ‘gradual’ and from an effectively zero bound – appealed to investors that were facing alternatives destined for falling or negative rates. With a firm sense of FOMO (fear of missing out) driving investors to anything that provides even a marginal yield advantage, the general luster of rate hikes in the US shown bright. That appeal has faded over the past year with the chase for tepid returns cooling and the Fed having to push back its follow up to December, but there is still some speculative juice to this speculation given the dramatic contrast to the likes of the ECB, BoJ and PBoC.

There is little chance that the Fed hikes at this upcoming meeting with even the Fed Fund futures 10 percent probability looking generous. Where there is potential to ease dovish skepticism and lift the Dollar is through rhetoric that reinforces at least one hike in 2016 as December futures only place a move at 47 percent. Yet, what appetite to front-run some negligible increase to rates will pale in comparison to the appeal that arises from the sentiment that arises from the central bank merely feeling confident in keeping with a gradual pace of removing accommodation. In contrast to major counterparts who are still tempting ever more extreme and event experimental easing efforts to avert economic and financial trouble, any hawkish view poses a vote of stability that will draw safety and speculative interests alike.

The other high-profile data point on the US docket will be the 2Q GDP update. The forecast calls for a robust acceleration in pace to 2.6 percent from the stifled 1.1 percent clip in the opening quarter. That would reinforce rate forecasts and the draw of a stable draw for global capital. It may also set the bar high and the buoyancy of optimism in this regard could be significantly undermined by a substantial miss. That being said, the important events from global counterparts’ dockets may buffer and even exaggerate the Dollar’s appeal. A weak UK 2Q GDP reading would speak to a weak foundation even before Brexit. The Eurozone 2Q GDP stats and ECB bank stress test results face growing fear over Euro-area stability. And, the BoJ is under pressure to pursue deeper accommodation to match the government.