US Dollar Gaining in Risk-Off Environment, but for How Long? 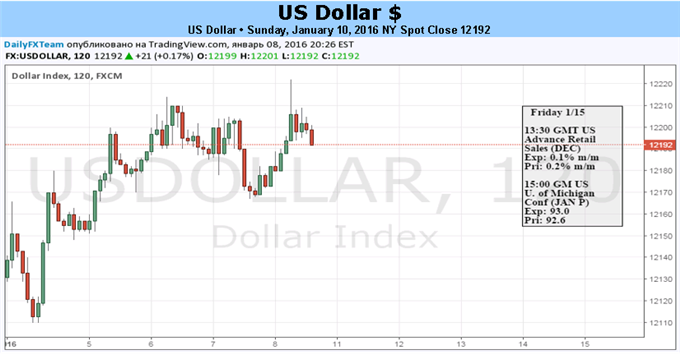 - Risk sentiment continues to deteriorate broadly across asset classes, playing favorably into safe haven currencies’ hands, like the US Dollar.

- EUR/USD’s reaction to the seemingly blowout December US NFP report indicates some degree of skepticism by the market over the headline figure – possibly due to seasonality.

- As volatility increases across FX markets, it’s a good time for traders to reacquaint themselves with risk management principles.

On balance, the USDOLLAR Index finished the week higher, although the underperformance of the Australian Dollar and the British Pound may be masking growing concerns under the surface for the greenback. With the FOMC on Wednesday making clear that its rate hike path will be gradual and data dependent, all focus for risk assets and the US Dollar alike was on the December US labor market release on Friday.

Over the past week, it was clear the switch flipped back into the “good news is bad news” world again. In a sense, upon further view and consideration, it seems this print may have been a “worst case scenario” for the US Dollar in that context.

Why was this print both superficially good and intrinsically bad for the US Dollar? On one hand, the initial reaction was easily explained: the overtly strong headline number (+292K) will likely be cited by FOMC members as a reason to maintain their belief that the Fed will hike rates four times in 2016. In the "what's good data is bad news" world, any indication that the Fed could tighten policy faster than currently expected - only two rate hikes are priced in for this year (per Fed funds futures) - against a rapidly deteriorating risk sentiment and an increasingly negative geopolitical news have proved to be a bad mix for higher yielding currencies and risk-correlated assets. 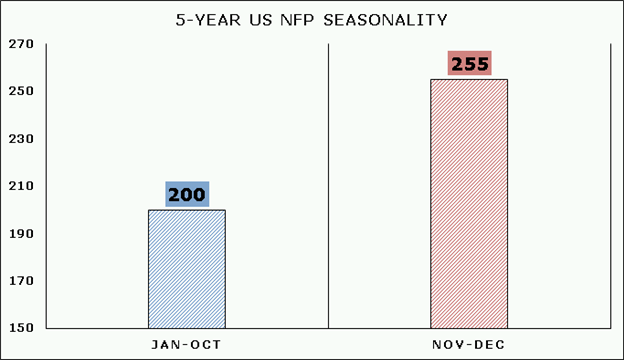 This is strong enough evidence that there has been a yearend seasonal distortion in the data in recent years (this same relationship is not evident when looking at a 10-year seasonality look back, for example), with no clear indication from Friday’s release that the US labor market strength with persist heading into 2016. Add in the fact that the US just saw its warmest December on record, it seems plausible that the strong headline figure is a one-off; the January print should be much weaker.

This is the bad aspect of the report for the US Dollar, and why we are skeptical of the US Dollar being able to maintain its gains. There are many signs that the US economy is slipping heading into 2015. To start, as evidenced in the recent labor report, subdued wage growth persists: the recent wage figure was praised for being as one of the best of the post-GFC era, despite the fact that at +2.5% y/y in December, it was below the consensus forecast of +2.7% y/y. 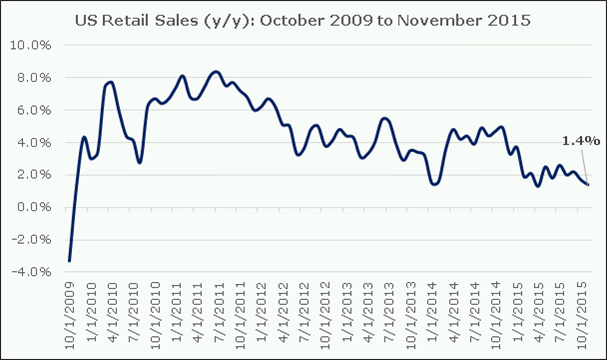 The composition of jobs themselves are looking more and more frail, with part-time jobs accounting for most of the recent jobs growth over the past year. Industrial production contracted for the first time on a year-over-year basis in a non-recession year since 1952 – when President Truman nationalized the US steel industry, hardly a normal economic time. Retail sales growth, at +1.4% y/y, is just above its post-GFC low of +1.3% (November 2009 and April 2015). Housing data is starting to look shaky, and the strong US Dollar is being cited more and more by multinationals as an excuse for their rough earnings results. The US economy may be closer to the edge than previously thought.

For the US Dollar, it needs economic data to turn the corner so that the market has faith not only in the higher yielding/tighter policy aspect supporting the US Dollar in the event the Fed follows through on its intended rate hike path, but also so that the hikes are viewed in context of the Fed not making a policy mistake that would push the US economy, and most likely the global economy, over the edge and into recession. In the event the Fed has to back-peddle, it would be particularly devestating for the US Dollar.

Over the medium-term, we may be witnessing the last few gasps of air at this altitude. For a pair like EUR/USD, for example, this may mean that a largely sideways range persists. With the retail trading crowd net-short EUR/USD, and non-commercial traders in the futures market holding 160.6K net-short Euro contracts, there is a contrarian sentiment argument for the pair to move higher in the near-term, particularly if European equity markets continue to slide thanks to the “portfolio channelrebalancing effect.” –CV