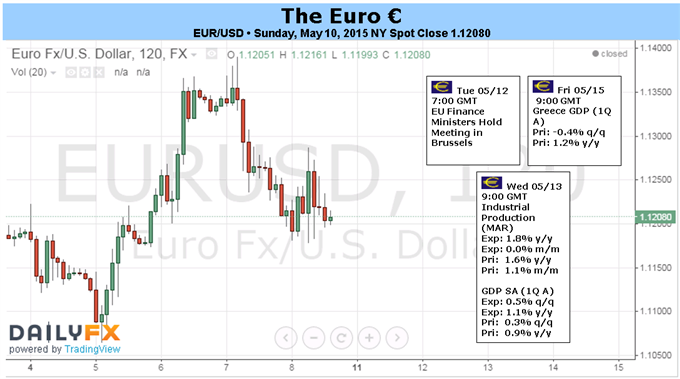 - The Euro’s run against the US Dollar has benefited from the bearish technical nature of the USDOLLAR Index.

It was a rather uninspired week for the Euro, as traders focused on events outside of the Euro-Zone more so than Greece or the continued unwind of trade positions based on the European Central Bank’s quantitative easing program. EURUSD was unchanged on the week (thanks to a late-week greenback rebound capped by a decent April US jobs report), EURGBP slipped by -2.03% (thanks to a surprising electoral outcome in the UK), and EURAUD dropped by -1.03% (as the Reserve Bank of Australia cut rates, but failed to give guidance on future dovish action).

In weeks past, and even at the start of the week, the Euro was largely driven by rising inflation expectations and in turn, rising core sovereign yields. The 5-year, 5-year inflation swaps closed the week at 1.785%, above the four-week average of 1.714%, capturing the recent elevation in energy prices. In a sense, this is a reversal of the initial effects of the ECB’s QE program, in which the portfolio rebalancing channel effect has faded. The German 10-year yield jumped to 0.57% by close on Friday, from an all-time low of 0.075% on April 20. Concurrently, the German DAX has fallen, and EURUSD has rushed higher.

Rising yields in the Euro-Zone have undoubtedly been the provocation to the EURUSD short covering move, which gained steam once again. Speculative positions in the futures market eased to 190.1K net-short contracts for the week ended May 5, from an all-time high of 226.6K contracts for the week ended March 31. During the period of shorts being reduced, EURUSD managed to gain +4.36%, and is now +7.09% from its low set on March 16.

Going forward, the prospect of further Euro gains will be contingent on the continued elevation of German yields to fuel short covering, as economic data momentum has cooled off in recent weeks. The Citi Economic Surprise Index finished last week at +14.2, well-below the four-week average of +32.1. That being said, data in the coming days could further the rise in yields, if they prove to feed into the narrative that the ECB’s loose policies have translated into realized economic growth, rather than just appreciation in financial assets like bonds and equities.

Without the continued rise in yields, however, the prospect of Euro short covering is limited, as markets have already effectively priced in interest rate expectations for the ECB and the Federal Reserve. Markets are now pricing in the first Fed rate hike to come in January 2015 (per the fed funds futures contract implied probability), while Morgan Stanley’s months to first rate hike index (MSM1KEU) now forecasts the ECB to end its loose policy regime starting in December 2017, from a previous forecast of January 2020 as recently as April 17. –CV