Dollar Climb is Sputtering as Counterparts Raise the Stakes 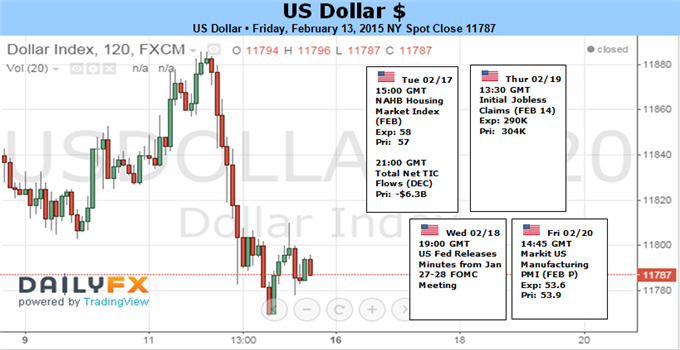 The Dollar’s relative fundamental appeal is strong. Backed by a pace-setting rate forecast, a comparatively-robust growth outlook and a market depth that can offer a buffer in case clouds gather; there is considerable appeal. Yet, how large is the Greenback’s theoretical premium? If the markets work to discount advantage and disadvantage, much of the currency’s strength should arguably be incorporated into current exchange rates. Further gains are certainly possible, but momentum – the technical embodiment of conviction – requires furthering the Dollar’s advantage or seeing the majority of its counterparts lose ground. There is a dearth of high-profile, yield-influencing US event risk on the docket ahead, but there are plenty of cross winds that may cause the USD problems.

For the Dollar’s own motivation, this past week’s newsflow offered relatively little to feed the fixation on rate expectations. Both Fed Funds and Eurodollar futures were little changed from the swell they received following the strong wage numbers in the February 6 jobs data. According to these measures, the market is pricing a first hike around the September policy meeting. Depending on what poll you reference, economists and Primary Dealers are more hawish in their view between June and July. As we move closer and closer to the the nearest consensus and hit key event risk along the way, speculation will heat up. For now though, we are still at least four months out and this week’s docket doesn’t carry heavy-hitting data or commentary.

If the changing tides of the Dollar’s own fundamental backdrop were the dynamic to this equation, we would likely see the currency consolidate or generate modest gains as time premium to the policy tightening burned. However, value is always relative. Though the Greenback is the world’s most liquid currency, its strength can change with the weakening or strengthening of its counterparts. Given its solitary reserve status, the rise or fall from one counterpart alone often does not carry enough weight to strongarm the Dollar. Yet, should a few major counterparts strengthen, it could swamp the Greenback.

This past week, a significant move was made by the British Pound which led to a remarkable GBPUSD move above 1.5350. The Sterling found footing after the BoE’s Quarterly Inflation Report. Though the review warned a brief bout of negative inflation was on the horizon and the first rate hike could be pushed out, the currency seemed heartened that the dovish outlook wasn’t as deep as the market may have been pricing in. A turn from GBPUSD is only a first step and it didn’t force a USDollar break, but it did anchor the benchmark. A few more key moves along similar lines and we could trigger a cascade of sell orders.

Ahead, the Pound will have another chance to gain traction on its rate forecast through its wave of January inflation data, the January labor report and even the minutes from the Bank of England last policy meeting – though this will likely rehash many of the same talking points that the Quarterly Report offered. Another substantial peer that may be prove the more underappreciated threat as a monetary policy spark is the Japanese Yen. Fully set in its open-ended QQE program, it may seem that the Yen is the traditional carry funding currency. Yet, given the recent concerns to come out of the BoJ that a weak currency was contributing to problems, this week’s Japanese 4Q GDP data and Wednesday morning rate decision should be watched closely.

Far more influential as a counterpart will be the Euro’s health. We are not expecting a change to the ECB’s flight plan for its new QE program launching next month. Instead, the world’s second most prolific reserve currency will be stirred by the burgeoning concerns about the region’s stability as negotiations over Greece’s bailout terms grind on. Since the anti-austerity Syriza-led coaltion took over the government last month, little to know progress has been made towards compromise. With meaningful deadlines coming due, if the pressure eases back, a relief rally for EURUSD could produce a strong Dollar downdraft.