US Dollar Rally Dependent on Fed Forecast and Haven Status 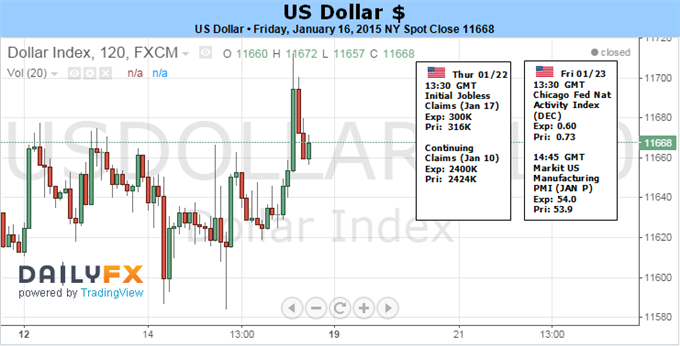 A tumultuous week for the currency market has found the Dollar closing its fifth consecutive week in the green and well on its way to a record-breaking seventh consecutive month climb. Yet, whether this benchmark is able to keep pace or tumbles into a reversal depends heavily on what happens over the next few weeks. Before the Fed feeds speculation for the timing of its first hike on the 28th, the ECB will decide this week whether it will lever the Dollar’s appeal by expanding its own stimulus effort. And, with volatility trending higher and market shocks (oil plunge, Russia, the SNB) increasing in frequency; traders’ appetite for havens is raising the Greenback’s profile once again.

In the Dollar’s climb these past quarters, much of the fundamental fuel that was siphoned for the move was sourced from the rate expectations. Yet, as persistent as the ‘mid-2015’ forecast for a first FOMC move has been, developments and data have offered a more neutral view of the liftoff. Adding to previous concerns of troubling international winds and tepid wage growth, this past week’s CPI reading showed headline inflation pressures were at a five-year low while the core level slipped to 1.6 percent.

Market speculation surrounding the timing and tempo of the central bank’s rate regime has also weighed expectation. Fed Fund futures are now only pricing in a 0.42 percent benchmark rate by the end of the year. However, as debatable as the timing of the first hike is, what is clear is that the US is already on a much more hawkish footing than its counterparts. The Bank of Japan and European Central Bank are pressing unconventional policy while many others have been anchored to a neutral bearing with a dovish bias. That represents relative appeal for the Greenback. And, we will assess just how much comparative strength the currency can sustain this week.

Preempting the Fed’s policy meeting towards the end of this month, both the BoJ and ECB are scheduled to deliberate on policy this week. After the surprise QQE upgrade in October, no new efforts are expected from the Japanese authority – but in such fractious financial circumstances, it is not impossible. Far more controversial is the ECB’s meeting on Thursday. As the Fed’s largest foil (and the dollar’s largest counterpart), the policy bearings from Europe are especially important. A full-blown quantitative easing program has been heavily suggested by President Draghi and other officials sometime in the first quarter. But, could actually come January 22?

With a Greek election just days after the forthcoming ECB meeting and given the complexity involved with a multi-national stimulus effort; a deferred adoption would seem prudent. However, after the Swiss National Bank (SNB) shocked the market by abandoning its own monetary policy center piece (a 1.2000 EURCHF floor) this past week; there is growing speculation that the move was to preempt an imminent wave of easing and Euro depreciation. As it happens, this could also play a role in catalyzing ‘risk’ trends.

Volatility has been building for months and currencies have been at the forefront of that development – the short-term FX reading is at its highest level in three years. With the SNB’s fireworks this past week, the appetite for safety has risen and its outlets have diminished. Dependency on a global pool of stimulus is driven by new bouts of economic hardship and its limitations are more discernable. If the ECB doesn’t fulfill expectations with the next infusion, it could potentially trigger a correction in European markets that quickly spreads through a susceptible global system.