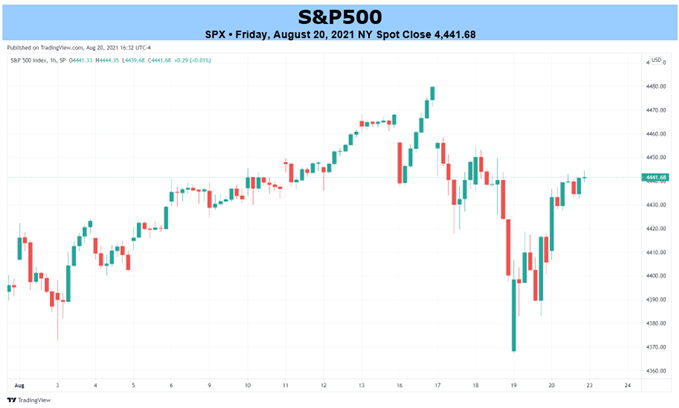 Global equities have been left licking their wounds this week as various external influences have made sentiment sour slightly after what has been an impressive run for stocks over the last few months. There is so much going on in the world at the moment that investors may be left a little confused as to what has been driving market sentiment in recent sessions.

One of the main sticking points is the ongoing spread of the Delta strain across the world, with a significant rise detected in places like the US, China, and Australia. It seems that even with high vaccination rates the virus is still highly infectious, which puts into question the feasibility of a return to normalcy anytime soon, and with that full economic recovery.

But stocks had been holding up remarkably well up until this week, when the Federal Reserve released its meeting minutes from its latest meeting in July, signaling that tapering of asset purchases was now being considered. There is no real surprise in that as economists had been predicting this move for months, but I guess an official acknowledgment from the Fed makes it just that little bit scarier, or that’s what may economists have been sourcing as the main reason for the equity selloff. But if you look at bond markets, yields have continued to pullback this week, which kind of contradicts the response you would expect after the Fed acknowledges tapering, its first step in unwinding its ultra-loose monetary policy.

So this reaction leads me to believe that there is a little more to it than just concerns about less flexible financing conditions, with it probably being a mix of tapering, economic growth, and virus concerns, as well as a market that was overstretched after months of outperformance.

Looking ahead, the Jackson Hole symposium is likely one of the main risk events for equities next week, as investors will be keeping a close eye on the statements from central bankers. Jerome Powell will be the man of the hour as many analysts expect the formal announcement of tapering asset purchases to be done at this meeting, with the start date as soon as September or November this year.

If confirmed, I would expect equities to stage another retracement although its follow-through is likely to be limited unless other external factors also worsen given the certainty that an announcement will happen. Alternatively, if Powell pushes back on tapering talks for now, then we could see stocks getting a bit of a boost and correcting this past week’s losses.

If the pullback in the DAX 30 continues into this coming week, traders should be looking out for the area around 15,500 for some support. This is where the 100-day SMA is converging and previous pullbacks have run out of steam. Just beyond that, the 127.2% Fibonacci extension (15,424) is also a good area for support if stops are triggered below 15,500. Any further bearish pressure likely has a clear path towards 15,000 before any new buyers are likely to jump in. On the upside, the 16,000 mark remains as the key resistance to beat.

The S&P 500 has been on a pretty clean bullish run since the end of 2020, having stuck to its ascending trendline and a similar pattern of retracements and extensions. Because of this, I wouldn’t say the bullish run is in trouble until it breaks below 4,280, meaning there is plenty of space for the pullback to offer new buyers a good entry level. Because of this retracement, we may see some sideways action along the trendline over the coming days, so 4,380 – 4,440 is a good target range for now.