The cryptocurrency market has pushed higher across the board this week with most coins and tokens booking double-digit gains over the last seven days. The daily moves have been small but consistent with today’s daily candle the only one (currently) showing losses since BTC made a $29,500 low on July 21. Today’s minor sell-off has in part been driven by news that Binance - the largest crypto-exchange by turnover – has stopped offering futures and derivative products in Germany, Italy and the Netherlands with immediate effect. This is the latest in a string of recent business closures from Binance who remain under heavy scrutiny from a range of regulators. Binance CEO Changpeng Zhao said this week that he would step down if a replacement CEO could be found as the company seeks regulatory approval and licenses around the globe.

Bitcoin (BTC) continues to respect resistance around the $40k to $42.k zone although any pull-backs have been minor, suggesting further attempts are likely in the near future. Prior resistance just below $37k should now act as first-line support, especially after Bitcoin broke convincingly above both the 20- and 50-day simple moving averages. The market is heavily overbought – using the CCI indicator – suggesting a short-term period of sub-$40k consolidation before a fresh attempt at pushing higher. 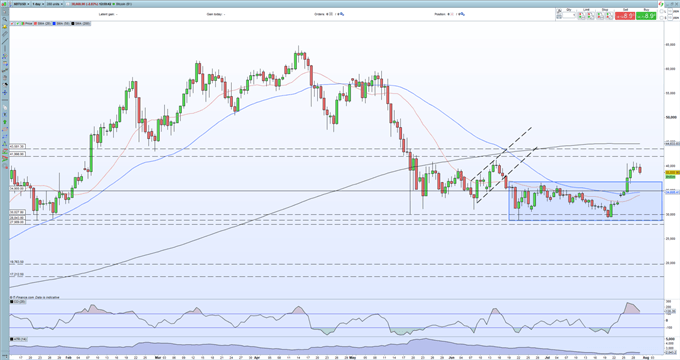 Ethereum (ETH/USD) is likely to see a pick up in volatility over the next few days as the ‘London’ upgrade comes into view. The upgrade, (EIP) 1559, which will increase clarity on miners’ fees, see the supply of Ethereum tokens reduced, and see block sizes doubled, is expected to take place next week.

Ethereum is struggling to break out of its recent range although current price action suggests further attempts are likely. ETH is back above all three simple moving averages and while it has just nudged into overbought territory, it has been at more extreme levels in the past few months. The current trading pattern is also reminiscent of the price action seen in late February to early April this year before ETH moved sharply higher. Initial support is seen from the previously noted moving averages between $2,135 and $2,065. 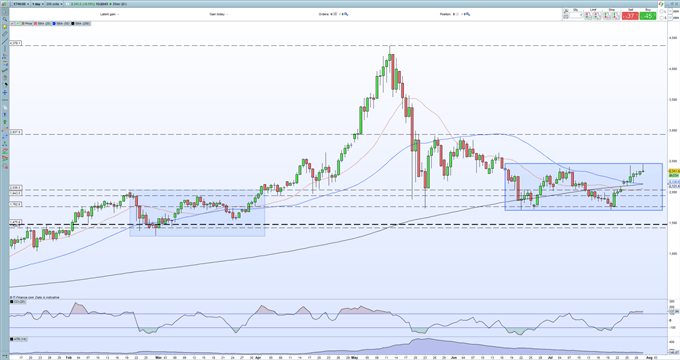 A to Z Crypto: Demystifying the Top Cryptocurrency Jargon

The Ethereum/Bitcoin spread is picking back up and nearing trendline resistance that has weighed on the spread over the last few months. Support around 550 continues to hold, leaving a meeting of support and resistance in the near future. 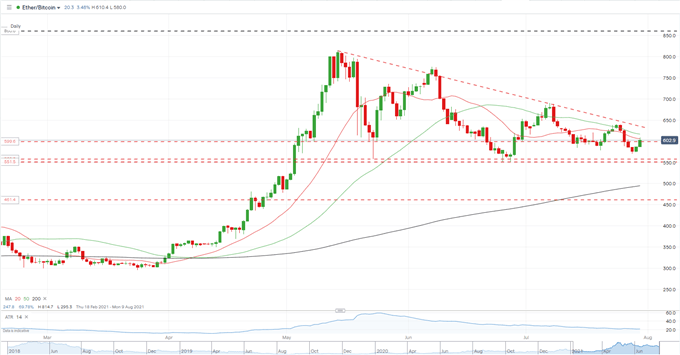