USD/MXN Week Ahead: FOMC Tailwinds Could Lead to Volatile Trading 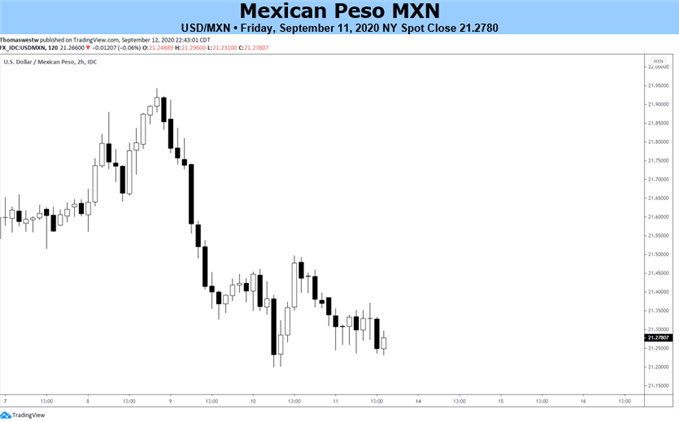 The Mexican Peso now stands at a 6-month high versus the US Dollar as tech shares have led the way for higher risk appetite in the last few weeks. That said, a three-day sell-off in equity markets managed to halt the slide in the US Dollar, but the bounce was particularly weak against the Peso.

Despite the Peso’s relative strength, the Mexican economy is predicted to shrink 10% this year, following a small contraction in 2019, leaving more than 34 million people out of work. Forecasts are not optimistic, as the impact of Covid-19 has lead to an increase in poverty, which I turn has lead to an increase in violence in the country. This has a big effect on tourism, which accounts for more than 15% of Mexico´s GDP, adding more fire to the unemployment issue.

Mexico is also struggling to control the spread of the coronavirus as the country has limited access to testing and it is hard to keep people off the streets. The government has also been reluctant to inject a lot of stimulus into the economy, which isn’t helping the economy, and the Peso is loosing it’s long-term attractiveness as a carry trade given its interest rate is being reduced to aid domestic spending.

Despite the Peso’s recent strength against the Dollar, USD/MXN is still 14% higher than the beginning of the year, despite having given back 16% of the gains seen since March. At this point, I think it is unlikely that we see the pair close to the levels seen pre-coronavirus, given that downside momentum in USD/MXN is stalling, but we could see further downside pressure trying to attempt to fill in the coronavirus gap.

Looking ahead, next week has no major economic event in the calendar for Mexico, so USD/MXN is likely to remain sensitive to broader market risk themes and USD pressures, which could be exasperated by the FOMC meeting on Wednesday.

From a technical standpoint, the 21.19 Fibonacci level is of increasing importance as USD/MXN heads lower. Thursday’s price action confirmed this as price action was reversed after bouncing off that support. If it is broken, the pair could attract further selling pressure in an attempt to fill the coronavirus gap, which stands between 20.48 and 20.30. This would put the 76.4% Fibonacci level at 20.18 as the key support area. On the upside, initial resistance could be met at 21.84, followed by the 50% Fibonacci level at the 22 handle, an area which has proven to be important in the past.