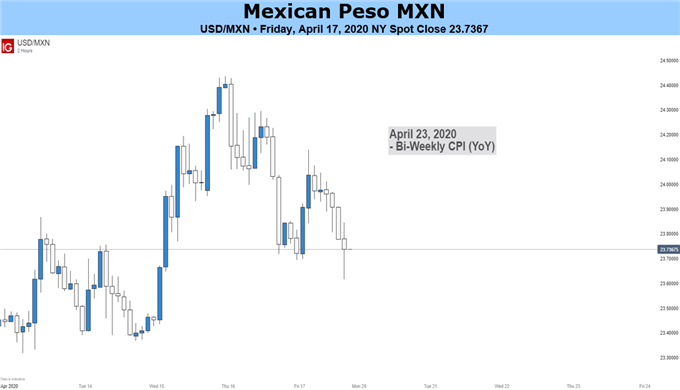 Market volatility seems to have quietened down slightly in recent days but there are still plenty of market movers to be aware of. No stranger to this is the Mexican Peso, which has continued to see wild swings despite risk-off sentiment dissipating. It’s performance against the US Dollar has been choppy since the start of the month, with a 9.8% range of movement from it’s all time high reached on 6th of April at 25.78 pesos per dollar.

The economic shock which is expected on the Mexican economy as a result of the Covid-19 pandemic will likely lead to a sever recession in 2020. Even in a recovery starts to take place in the second half of the year, general government debt/GDP is likely to jump by at least 6pp of GDP to almost 50%, the highest since the 1980s. This is what credit rating agency Fitch has highlighted in its Mexican economy outlook published on Wednesday, where they downgraded Mexico’s long-term foreign debt to BBB- from BBB, a step away from being considered a junk investment.

This comes three weeks after S&P Global downgraded Mexico’s long-term debt rating from BBB+ to BBB given the significant impact that COVID-19 is expected to have on its economy. In line with Fitch’s April report, the Mexican economy is expected to contract at least 4% in 2020 given the high level of uncertainty surrounding the future of economic performance. The balance of risk is firmly tilted to the downside as consumer confidence and business climate have been severely damaged.

USD/MXN was already heading higher before the announcement as the IMF had warned at the beginning of the week of a serious worldwide recession threat that would be the worst since the 1930s. Riskier assets retreated on the warning which caused the dollar basket to advance around 1% as safe-haven demand grew. But the dollar was retreating against emerging market currencies on Thursday as the uptrend lost momentum, causing USD/MXN to give up more than half of the gains it had managed the day before, settling around 23.74.

Furthermore, Mexican president Andrés Manuel Lopez Obrador met the governor of the Bank of Mexico (Banxico) on Thursday to try and convince him to deliver in advance the exchange surplus that has been produced in the first months of the year by the depreciation of the peso, at a time when there has been an increase in public spending to boost the economy.

After the meeting, Banxico informed that the complexity of the current economic situation was discussed, as well as the measures that have been implemented by the federal government and the Central Bank itself, within the scope of their respective attributions and within inter-institutional bodies such as the Exchange Commission, the Financial System Stability Council and the Banking Liquidity Regulation Committee. But the central banker reminded the president about the importance of respecting the procedure and time limits laid down in the central bank'sresidual operating asset law, which means it is likely that the government is going to have to dig around in its own pockets for some spare change to aid the economy until the exchange surplus is paid.

USD/MXN has bounced of it’s long-term support at 23.65 – as indicated by the green ovals in the 4-hourt chart above – and is now heading towards the 23.6% Fibonacci retracement at 24.08 from the 18.54 – 25.79 advance. The price action is now creating higher lows which will lead to a consolidation of the uptrend if the price is able to stay above the monthly low at 23.24.

The indicators on the 4-hour chart are bullish in the short term, as the shorter-term simple moving averages are moving above the longer-term averages, forming a bullish cross. The next upward objective is to overcome the weekly high at 24.43 where fresh buyers might step in, pushing the pair up towards the 25.00 peso mark. If sellers are able to regain control, a fall below 23.24 would confirm the end of the uptrend and a push lower towards 22.86.