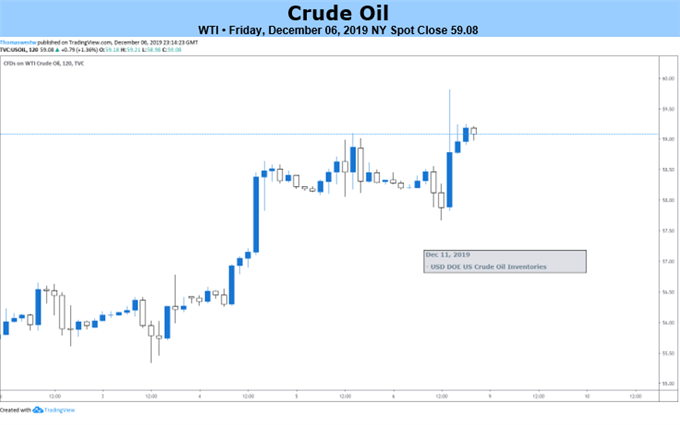 The price of oil extends the advance from the October low as the Organization of the Petroleum Exporting Countries (OPEC) and its allies pledge to take additional steps to balance the energy market.

The price of oil cleared the last month’s high ($58.74) as US Crude Inventories fell more-than-expected during the last week of November, and energy prices may stay afloat going into 2020 as OPEC and its allies remain committed in rebalancing the market.

Oil stockpiles in the US fell 4856K in the week ending November 29 versus expectations for a 1500K decline to mark the biggest contraction since September.

However, a deeper look at the report showed crude output sitting at a record-high, with oil production holding steady at 12,900K for the second consecutive week.

In response, OPEC and its allies have come to a broad agreement to reduce crude production by another 500K b/d through March 2020, and the group may continue to emphasize its commitment to the ‘Deceleration of Cooperation’ in an effort to keep oil prices afloat.

It remains to be seen if OPEC and its allies will take additional measures over the coming months amid the ongoing expansion in US production, and developments coming out of the world’s largest economy may play an increased role in driving oil prices as the Trump administration plans to increase tariffs on Chinese goods on December 15.

With that said, headlines surrounding the US-China trade negotiations may sway crude prices following the OPEC’s last meeting for 2019 as the two largest consumers of oil struggle to reach an agreement.

Nevertheless, the ‘Declaration of Cooperation’ may continue to ward off a bear market,the price of oil may largely track the range bound price action from the third quarter of 2019 as OPEC and its allies continue to regulate the energy market.

Crude oil appears to be tracking the price action from the third-quarter, with flattening slopes in the 50-Day ($55.63) and 200-Day SMA ($57.53) indicative of range-bound conditions.

The string of failed attempts to break/close above the Fibonacci overlap around $59.00 (61.8% retracement) to $59.70 (50% retracement) raises the scope for a near-term pullback in the price of oil, with recent developments in the Relative Strength Index (RSI) providing a similar signal as the oscillator snaps the bullish formation from October.