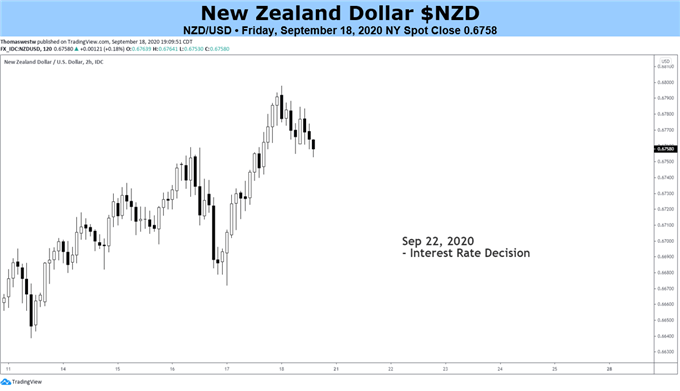 Despite a third consecutive week of losses for the S&P 500, a frequent bellwether for global risk appetite, the growth-linked New Zealand Dollar defied gravity and pushed higher. In fact, my majors-based NZD index is hovering around early 2020/late 2019 highs – see chart below. What could explain this divergence, and might it push the currency to set higher highs in the week ahead?

Strength in the Kiwi Dollar could be traders betting on the outcome of this week’s coming interest rate announcement from the Reserve Bank of New Zealand. This past Thursday, the country beat economists’ dismal expectations for second-quarter GDP. While the -12.2% q/q outcome was the worst since at least 1986, it was not quite as bad as the -12.5% consensus.

Finance Minister Grant Robertson also offered upbeat commentary, saying that the economy ‘will improve’ further by early 2021 and that it is rebounding from a recession. Economists are not expecting the RBNZ to change the Official Cash Rate from 0.25% on Wednesday, but odds of a 25-basis point cut early next year decreased from about 66% to 56% over the past 5 trading sessions, based on overnight index swaps.

The central bank has made it clear that negative interest rates could be on the table should growth falter. The central bank is also anticipated to unveil a package of new policy instruments in November. But, given what has been increasingly better-than-expected economic data outcomes out of the country since late July, this potentially undermines the need for further accommodative policies.

However, the RBNZ may keep the door open to them just in case. Still, a lack of urgency to implement them could further cool easing bets in the near term. That could boost the New Zealand Dollar. While that may be a recipe for the NZD to continue climbing, it still remains vulnerable to overall risk appetite. Should market mood continue deteriorating, it could sap some upside potential in NZD/USD. The outlook seems neutral. 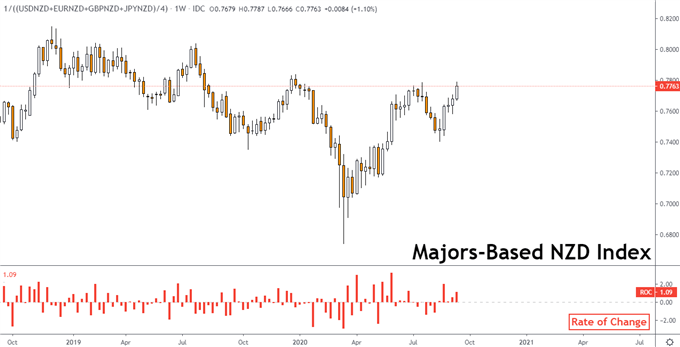