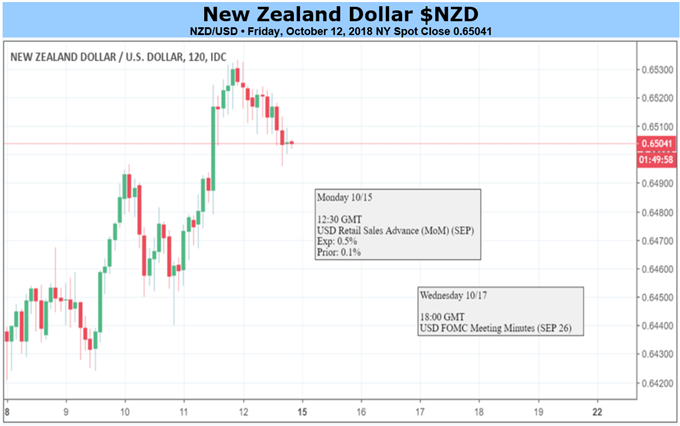 Despite an aggressive global market selloff, in which the S&P 500 was on course to deliver its worst weekly performance (as much as -5.44%) since March, the ‘anti-risk’ New Zealand Dollar (and the Australian Dollar) generally appreciated. Under normal situations, one would expect the yields in which these currencies enjoy to work against them as carry trades are unwound amidst investors prioritizing preserving capital.

But thanks to rising interest rates from the Fed, the US Dollar now plays two important rolls in trading. First, it holds the highest yield. Second, it is the world’s reserve currency. It seems as though the former attribute adversely impacted USD as 2019 rate hike bets were also diminished. Thus, perhaps traders sold the greenback and this came as a benefit to the New Zealand Dollar, and other commodity bloc currencies.

Risk trends and market mood seem to be poised on being a primary driver for the New Zealand Dollar given the surge in volatility. But let us briefly dive into the monetary policy fundamentals as NZD is also awaiting a local CPI report. New Zealand third quarter CPI is expected to pick up pace and clock in at 1.7% y/y from 1.5%. The quarter-over-quarter inflation reading is also expected to tick up to 0.7% from 0.4%.

The former would be the fastest pace of price gains in one year while the latter would be the most since the first quarter of 2017. Reserve Bank of New Zealand rate cut bets have been somewhat diminishing lately, overnight index swaps are now pricing in only a 11.2% chance of a cut in March. Given that local economic news flow has been tending to outperform as of recently, this may open the door to an upside surprise.

Such an outcome, which would be in line with RBNZ inflation expectations, could further reduce those dovish monetary policy expectations. This would bolster the New Zealand Dollar and could make it more likely that the central bank begins slowly stepping away from a mixed outlook on where rates could go next. Any hints leading to this direction would be considered a relatively hawkish shift.

But given the volatility in stock markets, especially if the selloff lingers, this may only offer temporary gains. There are numerous risks from the external front ranging from emerging markets to trade wars. In addition, the Fed may continue promoting the case for rate hikes in the week ahead considering that a local market correction seems to have been largely overdue in their projections.

With that in mind, keep an eye out for commentary from St. Louis Fed President James Bullard, Governor Lael Brainard and Dallas Fed President Robert Kaplan. They may continue reiterating the case for gradual rate hikes which could reignite the US Dollar, risking paring the gains seen in the New Zealand Dollar. The NZD fundamental outlook still remains bearish.