As anticipated, Asia Pacific benchmark stock indexes echoed the market selloff from Wall Street where the S&P 500 suffered its largest daily drop in about 8 months. The Nikkei 225 shed over 4% from its price as it set itself up for its worst performance over the course of five days since February. China’s Shanghai Composite tumbled 4.34% and Australia’s ASX 200 declined as much as 2.34%.

US government bond yields continued falling as December Fed rate hike bets kept deteriorating. Despite the flight to safety, the US Dollar failed to fully capitalize as the world’s reserve currency. During periods of intense risk aversion, the markets tend to prioritize safety as opposed to the reach for yields. In fact, the performance in FX seemed to echo what was seen during the US trading session.

There, Brexit optimism bets thanks to relatively supportive comments from Chief EU negotiator Michael Barnier kept the Euro and British Pound afloat against the US Dollar. Looking at the charts below, this trading dynamic continued during Thursday’s APAC session. Equally weighted EUR and GBP indexes gained as the USD basket fell short. 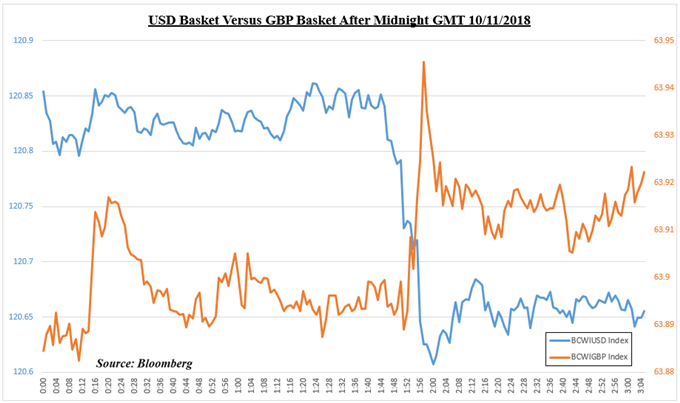 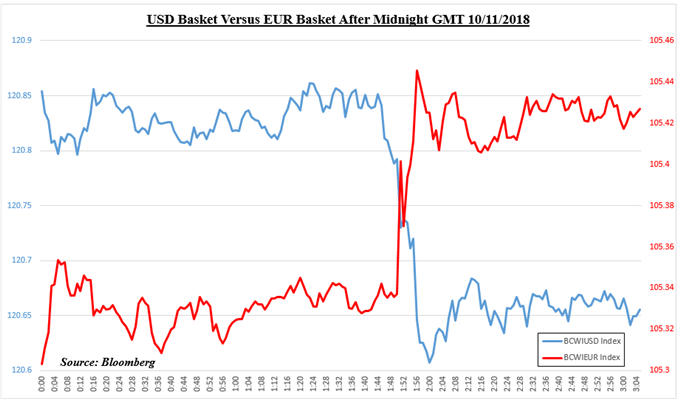 This could have been as a result of Asia/Pacific markets having their chance to react to Brexit optimism, especially if these are bets ahead of next week’s EU summit which takes place on the 17th and 18th. Note that the anti-risk Japanese Yen was actually cautiously weaker against its major counterparts while the Swiss Franc gained, perhaps reflecting the more optimal regional haven bids given updates out of Europe.

With that said, we may see the global stock selloff continue taking its course over the remainder of the day. But there are a couple of event risks that may bolster the US Dollar, offering it a chance to pare losses. The first is September’s US CPI report. Local economic data has been tending to outperform relative to economists’ expectations. An upside surprise there may reignite hawkish Fed monetary policy bets.

Meanwhile Kansas City Fed President Esther George will present a speech later today. There, she may continue reiterating their hawkish stance despite the correction in stocks. The central bank has acknowledged before that ‘some assets are at the upper end of their historical ranges’. Thus, this may not be much of a concern for them in the near-term. This could reignite gains in the US Dollar.

The US Dollar continues making downside progress after a break under a near-term rising support line. At the time of this writing, current resistance seems to be holding up at 95.26 which is the 38.2% Fibonacci retracement. A descent through it exposes the 50% midpoint at 94.98. Meanwhile a reversal would place 95.55 – 95.71 as the near-term range of resistance before the current October highs. 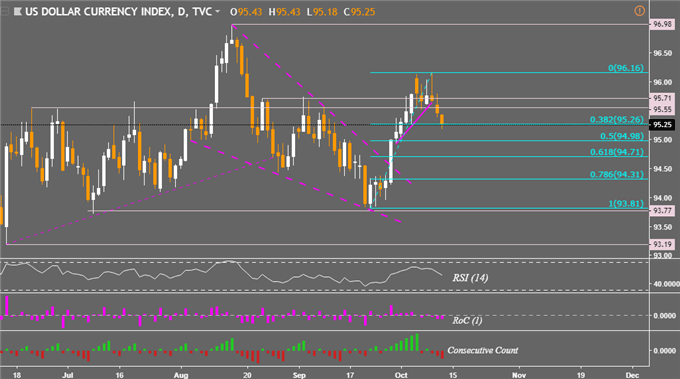