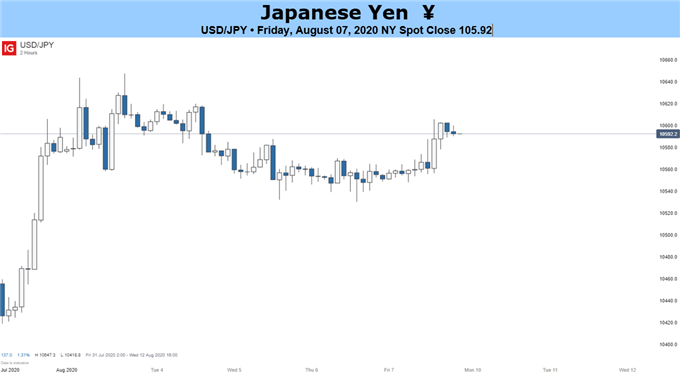 The anti-risk Japanese Yen heads into what could be an interesting week following the shift in market sentiment on Friday as the tech-heavy Nasdaq 100 underperformed the Dow Jones and S&P 500. This is despite a broadly optimistic US non-farm payrolls report as the nation added over 1.7 million employees. Other more-pressing developments overshadowed the jobs data given that markets are forward looking.

Recommended by Daniel Dubrovsky
What is the road ahead for JPY in Q3?
Get My Guide

These include escalating US-China tensions and a stalemate between Democrats and Republicans over the next fiscal package. If these allude to risk aversion in the week ahead, then the Yen could receive a bid as it tends to inversely track global stock markets – see chart below. On the other hand, bold efforts from central banks globally to lubricate financial markets could limit downside potential for equities.

The White House moved to attack Chinese tech companies, prohibiting transactions related to WeChat and TikTok on the grounds of national security risks. Tencent, the owner of WeChat and China’s most valuable tech company, saw its share price temporarily decline as much as 10% before trimming losses. The US also sanctioned 11 Chinese officials, including Hong Kong’s Chief Executive Carrie Lam.

This was in response to “Beijing’s policies of suppression of freedom and democratic processes,” following China’s implementation of the imposed national security law in HK earlier this year. Retaliation from China down the road could further sour market mood, likely boosting the Yen, particularly against cycle-sensitive currencies such as the Australian Dollar and New Zealand Dollar.

For updates on developments in the Japanese Yen and risk trends, make sure to follow me on Twitter @ddubrovskyFX

Further amplifying the unease in markets at the end of last week was a lack in US fiscal stimulus. The additional $600 per week unemployment benefit expired at the end of July and an abrupt end to it risks damaging prospects of a swift economic recovery. The White House mulled using executive order as an interim solution for certain provisions of the stimulus deal.

The significance of additional US stimulus and the risk of escalating US-China tensions could mute the impact of lagging data due next week. These include Q2 GDP from the United Kingdom and European Union, which may already be priced in by markets. More attention could be paid to University of Michigan Sentiment on Friday as a relatively timely indicator.