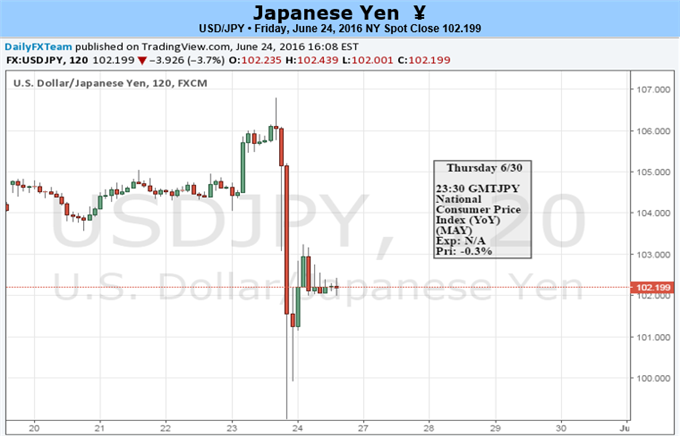 In the aftermath of the U.K. Referendum, USD/JPY may face a further decline next week amid the deterioration in risk sentiment, but the fundamental developments coming out of the world’s largest economy may spur a near-term rebound in the exchange rate should the data prints put increased pressure on the Federal Open Market Committee (FOMC) to further normalize monetary policy.

Even though the spike lower in USD/JPY fuels speculation for a currency intervention, the Bank of Japan (BoJ) may stick to the sidelines and continue to endorse a wait-and-see approach at the next interest-rate decision on July 29 as the central bank mulls the impact of the negative-interest rate policy (NIRP). Indeed, Japanese officials may toughen the verbal intervention on the local currency in an effort combat the low-inflation environment, but the negative shift in market sentiment may fuel greater demand for the Yen especially as Japan returns to its historical role as a net-lender to the global economy.

Nevertheless, an upward revision in the 1Q U.S. Gross Domestic Product (GDP) report accompanied by signs of sticky inflation may boost interest-rate expectations as Fed officials appear to be on course to raise the benchmark interest rate in 2016, but fresh comments from Fed Governor Jerome Powell, Chair Janet Yellen and St. Louis Fed President James Bullard may dampen expectations for higher borrowing-costs should the voting-members show a greater willingness to further delay the normalization cycle. At the same time, Fed officials may continue to scale back their economic forecasts amid the growing external risks surrounding the U.S. economy, and we may see another unanimous vote to retain the current policy at the next interest-rate decision on July 27 as the FOMC appears to be in no rush to implement a rate-hike. 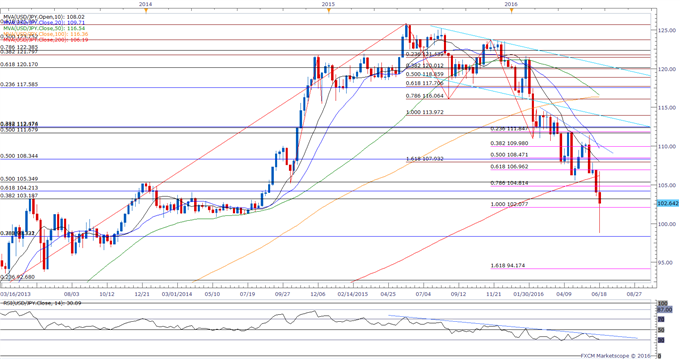 In turn, risk trends may largely influence USD/JPY ahead of the key data prints scheduled for the week ahead, with the longer-term outlook tilted to the downside as price and the Relative Strength Index (RSI) largely preserve the bearish formations carried over from the previous year. However, positive data prints coming out of the U.S. may generate a near-term bounce in the dollar-yen exchange rate should they put pressure on the Fed to further normalize monetary policy sooner rather than later.