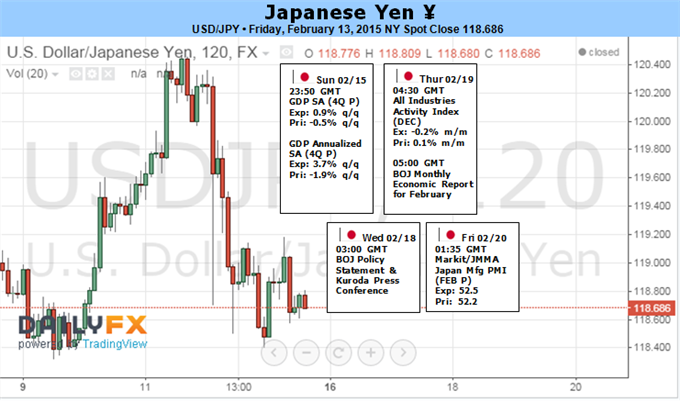 Japan’s 4Q Gross Domestic Product (GDP) report may heighten the appeal of the Yen and encourage the Bank of Japan (BoJ) to soften its dovish tone for monetary policy as the region is expected to return to growth during the last three-months of 2014.

The Japanese economy is expected to come out of the technical recession from 2014 as market participants look for a 0.9% rebound in the growth rate, and the recovery may push the BoJ to retain its current policy at the February 18 meeting as the central bank argues that any additional stimulus at this point is ‘counterproductive.’ As a result, Governor Haruhiko Kuroda may highlight an improved outlook for the region and promote a wait-and-see approach for the foreseeable future as the central bank head remains confident in achieve the 2% target for inflation over the policy horizon. With that said, the fresh batch of central bank rhetoric may spur a further decline in USD/JPY as market participants scale back bets for additional monetary support in 2015.

At the same time, the Federal Open Market Committee (FOMC) meeting minutes will also be closely watched as a growing number of central bank officials show a greater willingness to normalize monetary policy in mid-2015. Indeed, the Fed may continue to highlight an upbeat tone for the U.S. economy as the central bank anticipates lower energy prices to have a positive impact on the economy, but the policy statement may do little to spur a near-term rally in USD/JPY as the slowdown in private-sector consumption undermines the outlook for growth and inflation. In turn, dollar-yen may continue to consolidate and face range-bound prices throughout the remainder of the month as market participants weigh the outlook for monetary policy.

Despite the pickup in risk sentiment, USD/JPY may continue to give back the rebound from 116.86 and work its way back towards the monthly low after failing to push above the January high (120.73). As a result, we will continue to watch support/resistance in the week ahead, and may need a major fundamental catalyst to establish a new near-term trend in USD/JPY as a wedge/triangle pattern continues to take shape.