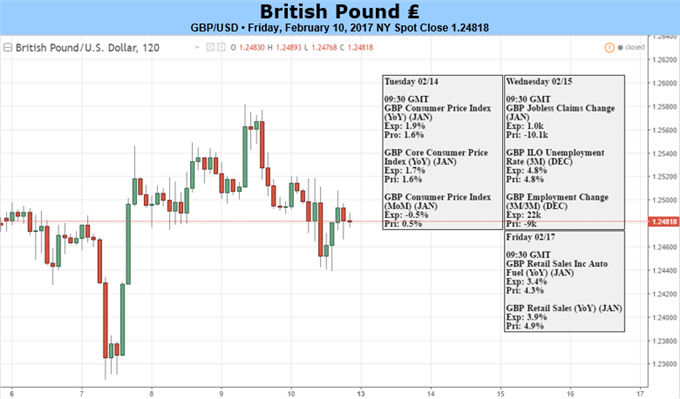 The British Pound continues to be evidence of the growth that can be had when a currency aggressively depreciates. Most of the growth has naturally led to a boost in exports, while there remains uncertainty toward the health of the consumer in the U.K. as a weaker currency tends to push inflation higher, and we have only seen marginal gains in wage inflation.

Next week, we will get a glimpse of UK Retail Sales in addition to CPI and further Brexit developments. While there was a disappointing reading in the choppy CPI figures to close out 2016, there has been a surge of tourism given the depreciating pound, which has lifted the sale of certain luxury items to help stabilize the sales figures.

One key point worth watching is the terms of trade, which shows the ratio of prices of exports to imports. A falling Terms of Trade shows that exports are depreciating while imports are more expensive. On Friday, we saw that export prices have risen by 12%, which is encouraging until we see the price of imported raw materials YoY that is anticipated to be higher by ~19% according to economist’s expectations.

In addition to import prices, traders will look for CPI to provide further support under rising inflation metrics, which can be seen with higher Gilt prices. Higher Gilt yields would likely be validated on an improving jobs numbers that are due to be released on Wednesday.

The technical picture shows stability in GBP, but not runaway moves as GBP/USD continues to hold above the 100-DMA support at 1.2445. Traders should prepare for more weakness if the price of GBP/USD breaks below the Feb. 7 low of 1.2347.