British Pound Trading to be Dominated Again by Brexit Concerns 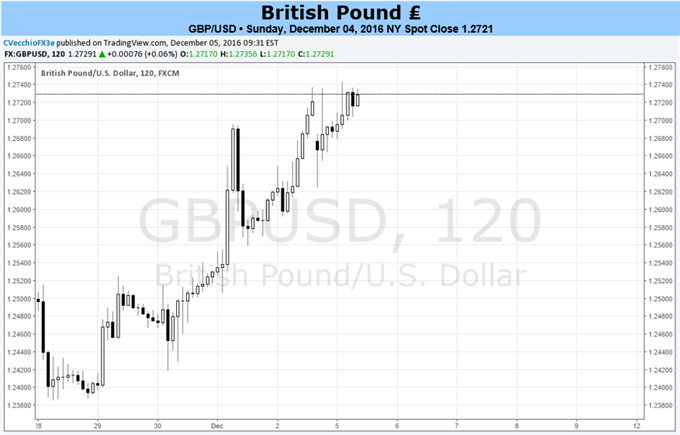 - The British Pound has been rising gently against the US Dollar for seven weeks now but any serious strength is likely to be curbed by Brexit worries.

- In particular, the week sees a key appeal by the UK Government to the country’s Supreme Court against a High Court ruling that Parliament must vote on the triggering of Article 50.

- If the ruling is upheld, as expected, that will cast serious doubt on whether Article 50 will be triggered by the end of March – the current Government target.

Trading in the British Pound will again be dominated by Brexit in the week ahead as an appeal by the Government began in the Supreme Court on Monday against a High Court ruling that Parliament must vote on the triggering of Article 50 that would begin the Brexit process. If the Government is unsuccessful, as expected, that will cast serious doubt on its target to trigger Article 50 by the end of March next year. The devolved Scottish, Welsh and Northern Ireland governments would also be given the chance to defend their interests, potentially delaying Brexit still further.

You might expect that to help the currency, given that a Brexit delay would postpone the adverse economic impact that some are expecting from the UK leaving the EU. Moreover, the Government’s rhetoric on Brexit has softened in recent days, with Brexit Secretary David Davis suggesting that the UK may be willing to continue to make contributions to the EU budget in exchange for access to the single market for goods and services – a so-called “soft” Brexit.

These comments helped the Pound to rally over the past week against both the Dollar and the Euro, particularly as talk has grown of “transitional arrangements”, implying that leaving the EU entirely could be a long drawn-out process. However, the currency has had little support from interest-rate expectations, which have fallen relative to those in the US.

While the US Federal Open Market Committee is all-but certain to increase the Federal Funds rate on December 14, the Bank of England’s Monetary Policy Committee will likely keep UK rates on hold the following day. As for the European Central Bank, it will likely extend its asset-purchase program on December 8, from March to September, but a change in Euro-Zone interest rates is not on the cards.

Moreover, UK economic data last week were mildly disappointing. Traders need to keep a close eye on the Purchasing Managers’ Indexes, or PMIs, as these are forward-looking indicators, and the PMI for the manufacturing sector in November missed expectations, although it remained well above the 50 level that separates expansion from contraction. The GfK measure of consumer confidence missed expectations too, although the construction PMI came in above forecast.

This week, though, the services PMI showed the sector grew last month at its fastest pace since January. Neither the official trade nor the official industrial production data for October, both due later this week, will likely have an impact as both are more backward looking.

Technically, too, GBPUSD has hit strong long-term resistance although a bounce could be ahead for EURGBPeven thoughthere’s been no clear-cut confirmation of a reversal yet.