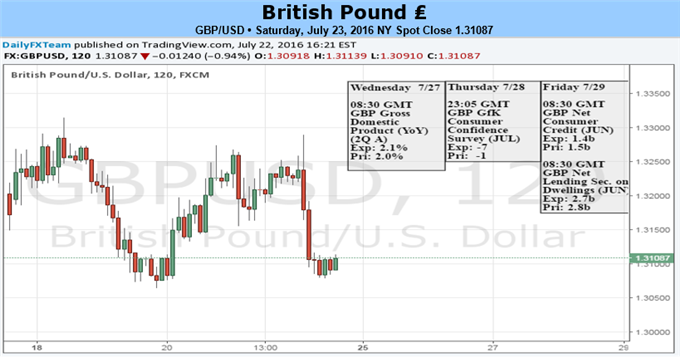 The British Pound finished the week almost exactly unchanged against the Dollar despite clear disappointments in UK economic data. A busy economic calendar in the days ahead could nonetheless have a lasting impact on trader sentiment, and the stakes are high heading into a critical Bank of England interest rate decision in two weeks’ time.

The upcoming release of UK Q2 Gross Domestic Product growth numbers will give investors a close look at the economy’s relative strength heading into the UK Referendum. And though we will have to wait some time before we see the ultimate impact of the so-called “Brexit” on GDP, any signs the economy was faltering before the vote would almost certainly worsen outlook after the fact. Recent industry surveys suggested the UK economy contracted at its steepest pace since the Global Financial Crisis through July. The disappointing figures forced an immediately sell-off in the GBP, and interest rate traders now predict a near 90 percent chance that the Bank of England will cut interest rates at their August 4 meeting.

Suffice it to say economic sentiment remains gloomy for the world’s sixth-largest economy. And yet by the same token the weight of expectations on future economic data is so low that even a small positive surprise could force an important British Pound relief rally. Recent CFTC Commitment of Traders data shows large speculators are now at their most net-short GBP/USD since the week of June 3, 2013.

Clearly the GBP remains in a strong downtrend, and yet it is demonstrably true that extremely one-sided short positioning raises the risk of sharp short-covering rallies. We need only look to the British Pound’s fast rally on July 20 following unexpected comments out of Bank of England voting member Kristin Forbes. Forbes stood in sharp contrast to BoE Governor Mark Carney as she suggested the central bank’s Monetary Policy Committee should not cut interest rates until there is more evidence of a post-Brexit economic slowdown. It is certainly newsworthy that a voting member would so candidly break rank and speak out against rate cuts. Yet her words alone do little to change broader outlook for the future of Bank of England policy, and the yield-sensitive British Pound now trades almost exactly where it stood before she made such remarks.

Traders should thus brace for British Pound volatility as any surprises out of GDP figures, and ultimately the focus remains on whether the Bank of England will move to cut interest rates and ease policy at their August meeting. The broad trend favors further British Pound weakness and the macroeconomic backdrop supports calls for GBP declines. Yet the risk is clear—extremely one-sided positions raise the risk of sharp relief rallies. Caution is advised in trading the Sterling given the clear uncertainty ahead. - DR