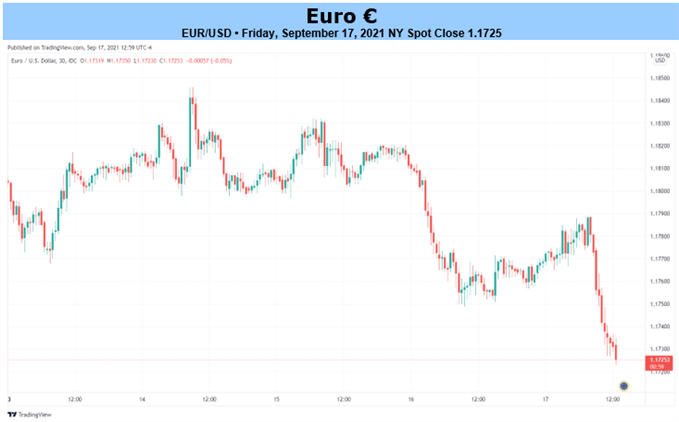 The direction of EUR/USD, like that of most markets, will likely be determined this week by the decisions made by the monetary policymakers at the Bank of Japan, the Bank of England and especially the Federal Reserve. That said, traders in EUR/USD and the Euro crosses would do well to look too at the opinion polls ahead of Sunday’s German Federal Election.

There will be no clear winner. Indeed, no party will win a majority of the votes, a coalition could take a month or even six months to be glued together and Chancellor Angela Merkel will remain in the hotseat throughout that period in a caretaker role. So nothing there to move markets.

However, the polls are important because towards the end of last week the center-left Social Democratic Party (SPD) was in the lead with 25.4% (14-day rolling average), ahead of Merkel’s conservative Christian Democratic Union (CDU) and its sister party the Christian Social Union (CSU), with 21.6%. Behind them were the Greens (16.1%), the liberal Free Democratic Party (11.5%), the far-right Alternative for Germany (11.3%) and the socialist The Left (6.3%).

Perhaps Merkel’s CDU/CSU is losing ground because she has decided to step down and has been replaced by the less popular Armin Laschet. Either way, it is more hawkish fiscally than the SPD, led by the rather more popular Olaf Scholz, which is broadly in favor of more fiscal stimulus and therefore more bearish for the Euro.

Chances are that the CDU/CSU will still be part of the coalition that will, eventually, be formed. However if, as talks progress, it seems likely that a coalition could be formed without them, that could be even worse for the Euro, the DAX and German Bunds. Two possibilities are a so-called “Red-Red-Green” combination of the SPD, The Left and the Greens or a “Traffic Light” combination of the SPD, the FDP and the Greens.

Away from the politics, the coming week is also reasonably busy for economic data. The releases start Wednesday with the flash Eurozone consumer confidence index for September, which is expected by economists to fall to -5.6 from -5.3. The next day sees the release of manufacturing, services and composite PMIs for the Eurozone and its constituent countries, and many of these are also expected to be lower in September than in August. Finally, Friday will bring September’s Ifo business climate index for Germany, which is expected to drop to 98.5 from 99.4.

Such numbers would reinforce the view that Eurozone monetary policy will be kept ultra-loose into the foreseeable future; another bearish factor for the Euro. Note too that European energy prices are soaring, with carbon, power and particularly natural gas prices all climbing on supply shortages – and that provides another headwind for the Eurozone economies as Winter approaches.