Euro bulls in the driving seat

European Central Bank President Christine Lagarde was widely expected to talk down the Euro last week after the brief breach by EUR/USD of the psychologically important 1.20 level on September 1. The ECB, the argument went, would respond to fears that Euro strength would put more downward pressure on Eurozone inflation, which dropped to minus 0.2% year/year in August. That, the argument went, would endanger the ECB’s goal of price stability.

Instead, the statement at the end of last Thursday’s meeting of the ECB Governing Council said merely that it “will carefully assess incoming information, including developments in the exchange rate, with regards to its implications for the medium-term outlook”.

Moreover, at her press conference afterwards, Lagarde gave little more information, saying only that the General Council had discussed the appreciation of the Euro and that it had to be monitored carefully, but that it was not targeting the exchange rate. Unsurprisingly, this gave a renewed boost to EUR/USD, which is now in a good position to stretch above 1.20 to levels not seen since the first four months of 2018, when it briefly advanced above 1.25. 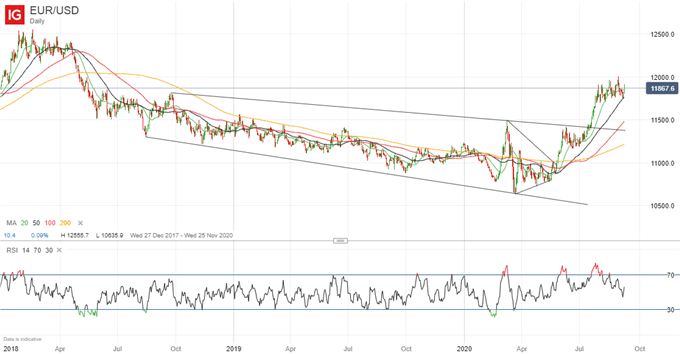 To make matters worse for the ECB, the Euro has also been exceptionally strong against the British Pound, with EUR/GBP benefiting from Sterling weakness caused by the continuing argument over the relationship between the UK and the EU once the Brexit implementation period concludes at the end of this year.

While the Euro will likely remain independently strong, EUR/USD will of course also be driven by the US Dollar side of the equation – particularly important in a week when the Federal Open Market Committee makes its latest announcement on monetary policy. However, with the Fed Funds target rate almost certain to be left unchanged, the meeting is unlikely to have a major impact on the pair.

As for Eurozone data, there is little on the calendar beyond industrial production and trade, and the ZEW index for the German economy in September will likely be little changed from its August level.

Like to know how central banks impact the FX markets? You may find this useful

We look at currencies regularly in the DailyFX Trading Global Markets Decoded podcasts that you can find on YouTube, here on Apple or wherever you go for your podcasts