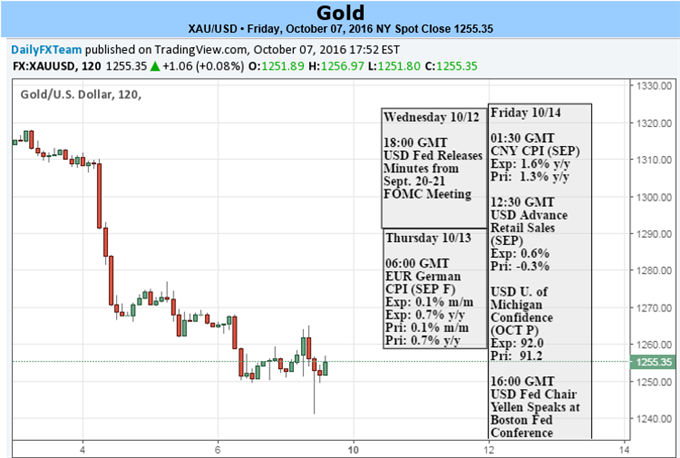 Gold prices plummeted this week with the precious metal down nearly 5% to trade at 1252 ahead of the New York close on Friday. The decline marks the largest weekly loss since October of 2014 and come alongside a broad rally in the U.S. Dollar with the DXY climbing more than 1.3% this week. U.S. Non-Farm Payrolls were mixed and although the headline print missed estimates, an uptick in labor-force participation paired with the upward revision to last month’s read further supported expectations for a December rate hike.

Coming into October, gold prices extended the late-September losses as USD strength continues to dampen the appeal of non-yielding assets. Nevertheless, with the recent batch of data failing to move the needle for the Fed’s November meeting, the recent weakness in the precious metal may abate over the days ahead should we get more of the same rhetoric from Fed officials. Heading into next week traders will be closely eyeing the release of the FOMC minutes on Wednesday as well as a fresh batch of commentary with a slew of 2016 FOMC voting-members (New York Fed President William Dudley, Kansas City Fed President Esther George, Boston Fed President Eric Rosengren and Chair Janet Yellen) slated to speak. 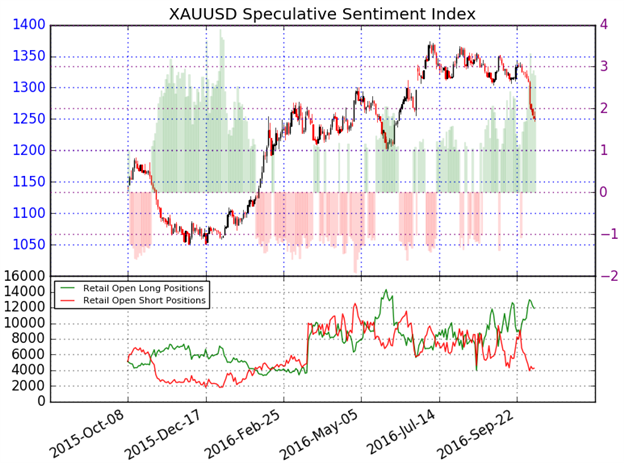 A summary of the DailyFX Speculative Sentiment Index (SSI) shows traders are net short Gold- the ratio stands at -2.69 (73% of traders are long)- bearish reading. Long positions are 4.7% above levels seen last week while short positions are 19.8% lower over the same time period. Open interest has also continued to soften and suggests that while the broader focus remains lower, the immediate decline may be nearing exhaustion. 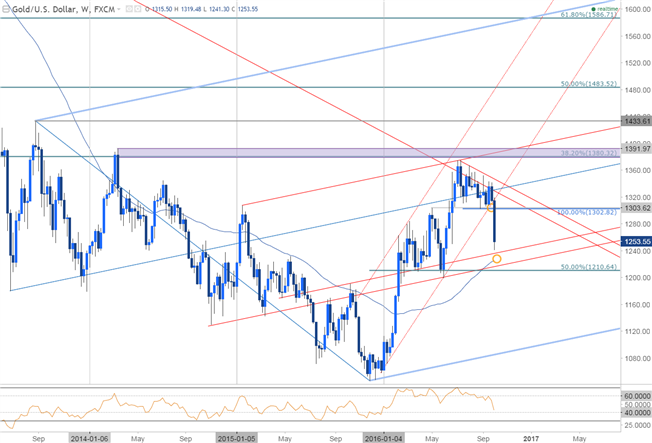 I published this chart in the Q4 forecasts published last week and as warned, the break of the 1303 key confluence support barrier marked a significant decline in gold prices. Look for support at the upcoming slope lines (note that the 52-week moving average falls within this range) with key support at 1204/10. 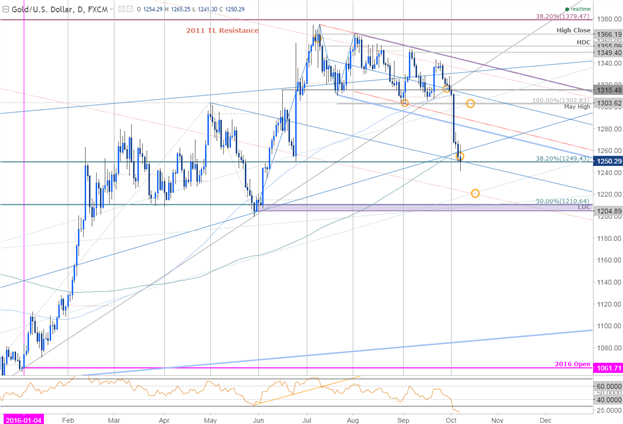 If gold closes lower on Friday it will have marked nine consecutive days of declines for the first time since mid-November (right before prices bottomed). The previous instance occurred in November of last year (prices bottomed in December). Note that daily RSI is deep in oversold territory, as was the case last year and suggests that we may yet see further downside before a more significant low is in place.

That said, gold is set to close the week above near-term support at 1249 - a region is defined by the the 38.2% retracement of the advance off the December low and the median-line extending off the My high. A break below this level targets the highlighted median-line confluence (~1220) backed by key support at 1204/10.

Initial resistance is eyed at former median-line support ~1290 with our bearish invalidation level now back at 1303. From a trading standpoint, I would be looking for a rebound early next week to fade into more meaningful structural support where prices could mount a more aggressive counter-offensive.