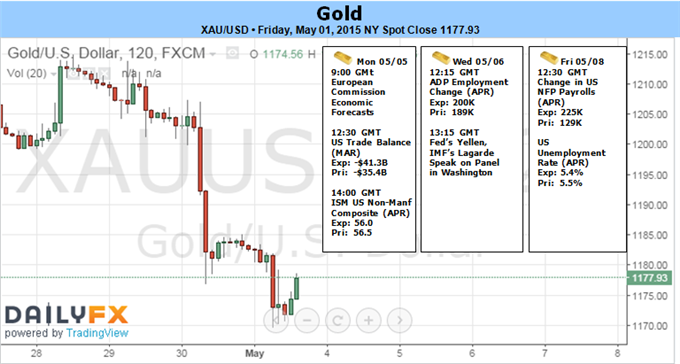 Gold prices fell to a 6-week low with the precious metal off by more than 0.50% to trade at $1172 ahead of the New York close on Friday. The decline marks the fourth consecutive weekly loss and comes amid a volatile session for bullion with prices testing the monthly close highs before reversing course to take out the monthly lows late in the week. The focus now shifts to the May opening range with key event risk next week likely to offer further guidance on the medium-term outlook with huge swings in prices this week testing virtually the entire April range.

A weaker-than-expected US GDP report mid-week capped a 3.8% rally in gold as expectations for an interest rate hike from the Federal Reserve were pushed out. The FOMC policy decision later on Wednesday however suggested that the recent US economic slowdown was largely seen as ‘transitory.’ with the committee still not ruling out and interest rate hike in the second half of the year. The April Non-Farm Payrolls report will central focus next week with consensus estimates calling for a print of 225K on the heels of the dismal March report which came in at just 126K with unemployment expected to downtick to 5.4%. Look for a strong print to keep gold under pressure as improving US metrics build the case for higher rates from the Fed.

From a technical standpoint, gold has posted a bearish outside weekly candle with the decline taking out the April opening range lows after testing a multi-year median-line resistance dating back to 2013. The sheer magnitude of the move has been impressive but leaves the near-term outlook clouded as we open up May trade. Note that the daily momentum signature has dipped back sub-50 after a brief stretch above with Thursday’s sell-off marking the largest single-day range since March 6th when prices plummeted more than $30 on the back of a blowout non-farm payrolls print.

We’ll maintain a neutral stance heading into the monthly open / NFPs with a broader bearish outlook back in play below this week’s high / ML resistance. Interim support is seen at the confluence of the 100% Fibonacci extension and the lower median-line parallel of the decline of the April highs. A break lower targets objectives at 1150/51 & the early stretch low at 1142.